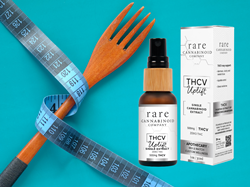 "THCV has often been referred to as "skinny pot" but it's wonderful to see so many scientific studies demonstrating how THCV suppresses appetite and leads to weight loss."

Rare Cannabinoid Company was the first brand in the world to offer purified THCV for sale as a tincture and THCV CBD blends. Both products are extremely popular as THCV has an uplifting, clear-headed effect and the latest research shows how it works for weight loss and may even help reduce addictive behaviors for those trying to quit smoking or abstain from alcohol or drugs. With more than 40% of Americans classified as clinically obese, weight loss and fitness are among the most-popular New Year’s Resolutions. Smoking tobacco, being overweight and alcohol use are the three leading preventable causes of death. Knowing this, many people start the new year with healthy goals but quickly fall back into bad habits. Rare Cannabinoid Company says its 15% off subscription plan can give them the boost to stay on track.

Customers can sign up for a Rare Cannabinoid Company Subscribe and Save plan for any product and receive 15% off. They can choose to have new products sent every two weeks, each month, every six weeks or every two months. All orders include free shipping to all 50 U.S. states and can easily be cancelled online at any time without the customer incurring any extra charges or penalties. Cannabinoids work best when taken daily and with a subscription plan customers do not need to worry about running out.

“Rare” or “minor” cannabinoids are similar to CBD and THC but each one offers unique mental and physical benefits. Rare Cannabinoid Company details the scientific research behind how THCV may aid weight loss goals below. The brand was recently featured in an article on the world's largest cannabis information website, Leafly, entitled: "Can THCV really curb the munchies?" In addition to THCV, Rare Cannabinoid Company's website also contains articles with links to scientific studies on CBN for sleep, CBC for depression and CBG for pain and inflammation.

What is THCV and how does it work its magic? THCV (tetrahydrocannabivarin) may sound like THC (tetrahydrocannabinol), which is another compound found in hemp and cannabis, but they actually have opposite effects. While THC gets people high and makes them lazy, hungry, and likely to eat everything in sight, THCV is energizing and curbs the munchies. All cannabinoids - CBD, THC, THCV, CBN, CBG, CBC etc. - work with the human endocannabinoid system (ECS). All humans - all vertebrates, in fact - have an ECS. Put simply, it regulates a lot of our mental and physical wellbeing, including appetite, mood and sleep.

THC and THCV have opposite effects on a receptor in our brain called the CB1 receptor. THC turns it on, promoting the release of hunger hormones while THCV turns it off, thereby controlling our appetites. CB1 antagonists (like THCV) have also been found to ease addictions to nicotine, alcohol, opioids and other addictive drugs. A multi-part THCV study on animals showed THCV to be effective at curbing nicotine cravings. Learn about THCV for nicotine addiction here.

"THCV has often been referred to as "skinny pot" or "the sport's car of cannabinoids," but it's wonderful to see so many scientific studies demonstrating how THCV may suppress appetite, causing weight loss," said Jennifer Carlile, Rare Cannabinoid Company Co-Founder and Creative Director.

"New research is emerging daily and we look forward to seeing more studies on THCV's potential uses against addiction too," Carlile said.

For weight loss, THCV works in a similar way to a pharmaceutical anti-obesity drug, Rimonabant, which also blocks the CB1 receptor. Rimonabant was extremely effective at reducing weight and blood glucose levels in obese patients. However, it caused a serious side effect, depression, and was pulled from the market.

Thankfully, THCV does not cause depressive side effects. Experiments on human volunteers explain the differences between Rimonabant and THCV.

Magnetic resonance imaging (MRI) was used to examine people’s neural responses while taking Rimonabant or THCV. The patients taking Rimonabant had a reduced response to rewarding or pleasurable stimuli (tasty chocolate). They also had an increased negative response to unpleasant sights and tastes (moldy strawberries). Scientists believe that blocking the "reward" or "pleasure" response to tasty foods was probably the cause of the patients’ depression. It not only made them want to eat less chocolate but made it more difficult for them to perceive pleasure, which is a tell-tale symptom of major depression.

Meanwhile, the THCV experiment found that THCV did not harm the patients' reward or pleasure function. It only increased the effects of the unpleasant stimuli. That increase stopped people from eating too much without having a negative effect on their mood.

Other studies show the success of THCV on appetite control, blood glucose levels and diabetes. For example, one scientific study states that THCV alters connections between regions of the brain in a way that “THCV could allow greater control over food intake.” A separate study on mice concludes that THCV appears more helpful for type 2 diabetes while CBD offers more potential benefits for type 1 diabetes. (People who are obese are up to 80 times more likely to develop type 2 diabetes, whereas type 1 diabetes isn't related to being overweight.)

It's statistics like those that push us to make New Year's Resolutions to lose weight in the first place!

Rare Cannabinoid Company was launched in the first quarter of 2020 in Honolulu, Hawaii. Created by husband-wife duo, Jared Dalgamouni and Jennifer Carlile, it is the sister brand of Hawaiian Choice. Hawaiian Choice is Hawaii's most-popular CBD brand and can be found in more than 175 locations from New York to Tokyo. Both brands welcome wholesale inquiries from brick-and-mortar stores worldwide.

The idea for Rare Cannabinoid Company was spurred by customers' questions about rare cannabinoids and the lack of an easy-to-use, clearly dosed apothecary-style offering of these beneficial compounds. Hawaiian Choice is a luxury, lifestyle brand that incorporates organic and wild gathered Hawaiian fruits, essential oils or honey into all of it premium tinctures, topicals, gummies and pet products. Meanwhile, Rare Cannabinoid Company has a more medicinal approach.

The company's THCV oils are extremely popular, especially as Rare Cannabinoid Company was the first brand in the world to offer purified tinctures of THCV and THCV CBD blends.

Of course, there are also cannabis strains that contain a high amount of THCV. These strains include Doug’s Varin, Durban Poison, Tangie and Jack the Ripper. However, a high amount of THCV is still just 1 to 5%. So, those cannabis flowers also contain a whole lot of THC, which will pretty much annihilate any appetite suppressing effects of THCV and probably get you too high to want to work out.

You can see this in an experiment on mice. Those that took pure THCV ate less and lost weight. Those that took THCV in a full spectrum product with THC did not eat less or lose weight. However, when CBD was given to the mice taking THCV plus THC combo, the CBD countered the effect of the THC and those mice proceeded to lose weight. Moral of the story (study)? If you want to lose weight, it may be best to take THCV alone. However, if you consume THC for medical or recreational purposes, you may also want to take CBD to try to counter THC's storm-the-fridge-now effects!

You can see third-party lab reports for every batch of every product here.

Meanwhile, CBG (cannabigerol) is believed to have antioxidant, anti-inflammatory, neuroprotective and anti-bacterial properties and is being researched for use against myriad afflictions. One can learn about and buy CBG here.

The apothecary-style line of purified single extracts is intended to be mixed and matched or taken with the brand's full spectrum Rare Hawaiian CBD for the entourage effect.

The health and wellness benefits of CBD (cannabidiol) are well known. Rare Cannabinoid Company offers a really special full spectrum CBD oil that is extracted from hemp grown on the island of Kauai in Hawaii. It is nourished by year-round sunshine, tropical rain and mineral-rich red dirt. It is offered in 500mg and 1000mg options. Both contain organic MCT coconut oil and are lightly flavored with food grade organic Italian lemon and wild orange oils.

For those interested in boosting their CBD intake, Rare Cannabinoid Company also offers a single extract 3000mg CBD. This oil contains a huge amount of CBD -- 3000mg! -- and flavorless organic MCT coconut oil. One dropper-full contains more than the maximum daily dose intended for human consumption. That is why that product comes with a measured glass dropper instead of a spray cap like the other products.

Prices for these exotic, rare cannabinoids start at just $49 and include free U.S. shipping. Sign up for a subscription, receive 15% off and never worry about running out.

Join the Rare Cannabinoid Company newsletter from their homepage for a chance to win $300-worth of products. One winner is announced every month and everyone on the newsletter is entered and re-entered monthly.

Rare Cannabinoid Company’s 15% off subscription plan could be the boost that helps people stick to their New Year’s Resolutions for 2021.

Rare Cannabinoid Company was established in Hawaii, USA, in Q1 2020 and is a pioneer in the "rare" or "minor" cannabinoid industry, offering purified tinctures of THCV, CBN, CBG and CBC as well as blends with full spectrum Hawaiian CBD. All products undergo third-party lab testing with reports online. Products ship daily from Hawaii and Texas.