Ray Price Harley-Davidson recently was honored by the North Carolina Retail Merchants Association with its “Retailer of the Year” award. For more than 30 years, Ray Price has served as the center of motorcycling in Raleigh and Wake County. 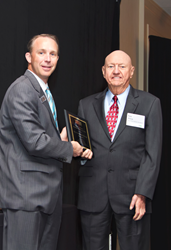 We at Ray Price take tremendous pride in helping to educate the public about the fun and camaraderie of motorcycle riding culture.

Ray Price Harley-Davidson was honored by The North Carolina Retail Merchants Association (NCRMA) with its “Retailer of the Year” award, presented recently during NCRMA’s annual meeting and luncheon in Winston-Salem, N.C. Also named by NCRMA as 2015 award recipients: Lowes Foods Stores, Monkee’s, and Walgreens. Ray Price was the only organization based in the Raleigh and Durham region to be recognized this year.

“We are proud of all of our retail members, who work day in and day out to provide superior value to their customers, and these four award recipients have served North Carolina’s retail industry with distinction,” said NCRMA President and General Counsel Andy Ellen. “They deserve statewide recognition because they are helping to sustain local economies, changing to meet the needs of their customers, and giving back to their local communities.”

NCRMA’s Retailer of the Year Awards is an annual celebration of retail excellence, from the smallest independent retailers to the largest chains across all sectors. Businesses are evaluated according to their contributions to the state’s economy, their business innovations, as well as their impact on local communities. Award-winners are selected by a committee consisting of retailers, retail educators, retired retail executives and suppliers to the industry.

“We’re excited to be recognized by the NCRMA and are honored to be named among very good company,” said Mark Hendrix, general manager, Ray Price Harley-Davidson. “We take tremendous pride in helping to educate the public about the fun and camaraderie of motorcycle riding culture. Our staff has more than 950 years of riding experience as a team to offer riding education and customer service that helps change stereotypes in the community.”

Among the Southeast’s top motorcycle dealerships, Ray Price is an iconic name that has served as the center of motorcycle culture in Raleigh for the past 30 years. Home to Hall-of-Fame racing legend Ray Price, the dealership actively supports area charities through a wide range of philanthropy projects, including weekly fundraising rides and quarterly cook-offs for charity. In recent months, the organization along with Raleigh H.O.G. raised $1,200 for the Masonic Home for Children in Oxford and delivered 70 repaired bicycles to needy youth, including a $3,000 donation to Toys for Tots.

For the past 10 years, Ray Price has hosted North Carolina’s largest motorcycle festival, Capital City Bikefest, which attracts more than 100,000 visitors to downtown Raleigh each September.

“NCRMA was formed in 1902 to represent the interests of retailers before the various bodies of state government, and more than one hundred years later, we are still walking the halls of the legislative building and regulatory agencies to make sure North Carolina is a good place to do business,” said the NCRMA's Ellen. “What many do not realize is that the retail industry is the number one private employer in our state, employing one in four North Carolinians.”

About the North Carolina Retail Merchants Association
The North Carolina Retail Merchants Association is a nonprofit trade association organized in 1902 to improve the business climate for retailers in North Carolina. Over 100 years later, NCRMA remains the voice of the retail industry for North Carolina. NCRMA represents the interests of individual merchants before the General Assembly and serves as a vital link to state government. Its credibility lies in its longevity and commitment to serving the ever-changing needs of its members. The Association’s membership includes more than 25,000 stores from across the state whose business represents 75 percent of North Carolina’s retail sales volume. NCRMA serves both large and small retailers from multi-state chains to local “mom and pops,” and all types of merchants including antique, apparel, art, automotive, book, carpet, department, drug, electronics, floral, furniture, grocery, hardware, jewelry, paint and variety stores. This is Retail North Carolina.

Ray Price of Ray Price Harley-Davidson with the award for 2015 Retailer of the Year from the N.C. Retail Merchants Association.