ray d. brown’s newly released “One LORD” is a thorough look into the doctrines and false teachings that revolve around the church today

“One LORD” from Christian Faith Publishing author ray d. brown brings a compelling exposition that brilliantly examines the factors that broke and divided Christianity in the current times. 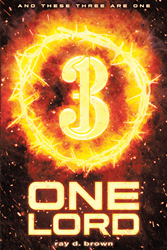 “One LORD”: an illuminating perspective that calls everyone’s attention to some of the pressing subjects in Christianity and the dogma that affects the church and its teachings. “One LORD” is the creation of published author ray d. brown, a lay minister and speaker at Harbor House Christian Center in Henderson. He is the son of a Baptist minister and is originally from West Virginia.

ray d. brown shares, “This manuscript is birthed out of my personal Bible study and inquiry into the identity and characteristics of God, specifically what I sometimes call the plurality and the oneness nature of God. For he is indubitably both.

“This book attempts to objectively examine the primary doctrines that have plagued and fragmented Christianity, and especially the man-made dogma and tenets which divide Pentecostal Christianity. The emphasis throughout is explicitly upon God’s desire for the unity of the Spirit and upon his own indivisible character and essence. A distinct significance is placed upon the high priestly prayer of the LORD Jesus Christ for all of Christianity: that we not only be made One with him in the Father (by the Holy Spirit) but that we be made progressively ‘perfect in One’ (re. John 17:21–23).

“It is my hope that this work awakens an awareness in all of God’s people of his grief and displeasure at our divisive posture and alienating attitudes toward those who believe differently than we do. Categorically, I address the doctrines of the oneness and trinity of God and the differences we have concerning water baptism that have so sorrowfully and shamefully separated us.

“My hope and my prayer for this book is that it be a unifying catalyst in the heart of the individual believer to draw us closer as the body of Christ, his Church, one Christian at a time.

“My aspiration in Christ is to accentuate the gravity and the urgency that the LORD Jesus Christ does not find us in such a state of glaring (and disgraceful) disunity at his coming. Someone has to say it, and this book, without apology, does just that.”

Published by Christian Faith Publishing, ray d. brown’s new book is an excellent manuscript that brings awareness to Christians and addresses the oneness of God in the hopes of uniting their hearts much closer to the Savior.

Consumers can purchase “One LORD” at traditional brick & mortar bookstores, or online at Amazon.com, Apple iTunes store, or Barnes and Noble.

For additional information or inquiries about “One LORD,” contact the Christian Faith Publishing media department at 866-554-0919.