“The Leap from the Red Dress into the Jar of Clay: A Musing Memoir” from Christian Faith Publishing author Raymond Russell is an intriguing narrative about a life lived in bathos in a world drenched in depravity. 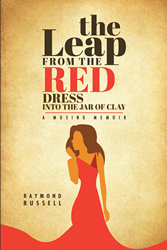 Russell shares, “Based on a real-life story of a man who was cared for by his grandfather—a life filled with sentiments perhaps never spoken so boldly as though the individuals mentioned were from a different world. Wayward difference-built circumstances and the monomaniacal disciplines hoarded perhaps is everyone should get a chance to apologize. His son said that he wanted to thank him, which has been unlike the man who should be his father whose sentiments, or the lack thereof, helped to produce such musing memoir that has highlighted an obviated plain in the valley on a hill called Gully, a place where his grandfather’s uncompromising care loomed over a presumed parentless lifestyle.

“The work showed how existing power could turn life from this revolving door into a phenomenon that a tackler or the tackled resolved social strands of circumstance that once seemed hard to eliminate. They manifest into more powerful entities or situations, perhaps that make lives even the dysfunctional ones soared.

“And aside from so much fostering of seeds of social isolationism, the hope embedded here might be that readers see a medium of cleansing rather than someone there has been just spilling his guts about a woman and the man who should have been his parents. Instead, their nonvocal existential realities produce the virtual amputation of a child’s past parental experience.

“Although rescued from physical and socially scintillating childhood, dazzling nontherapeutic unfortunates displayed the awesomeness in ‘The Leap from the Red Dress into a Jar of Clay.’ The settings allowed what happened throughout this child’s formative years, a consequence with the potential of what could have become resurgent to his children’s demise. The father did not deserve the parental right; no wonder he walked away, not even acknowledged or recognized his paternal responsibility, which the child now has grown thought he was done—and also he said so—but more remains to be told.”

Published by Christian Faith Publishing, Raymond Russell’s new book contains thought-provoking lessons that will enlighten parents and adults on the essence of childhood and responsible parenthood.

View the synopsis of “The Leap from the Red Dress into the Jar of Clay: A Musing Memoir” on YouTube.

Consumers can purchase “The Leap from the Red Dress into the Jar of Clay: A Musing Memoir” at traditional brick-and-mortar bookstores or online at Amazon.com, Apple iTunes store, or Barnes and Noble.

For additional information or inquiries about “The Leap from the Red Dress into the Jar of Clay: A Musing Memoir,” contact the Christian Faith Publishing media department at 866-554-0919.