The Dead Are Arising: The Life of Malcolm X wins top spot for nonfiction audiobook 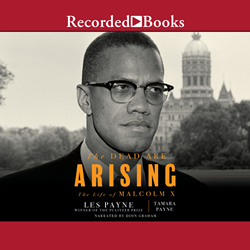 We feel privileged to bring this definitive work of nonfiction to the world on audio at a time when it has never been needed more.

RBmedia, a global leader in spoken audio content and digital media distribution technology, today announced that its audiobook The Dead Are Arising: The Life of Malcolm X by Les Payne and his daughter Tamara Payne has won the 2020 National Book Award for Nonfiction. Produced by RBmedia’s flagship publishing brand, Recorded Books, the audiobook is available for download on Audible, iTunes, Google Play, Audiobooks.com, and wherever digital audiobooks are sold.

Les Payne, the renowned Pulitzer Prize–winning investigative journalist, embarked in 1990 on a nearly 30-year-long quest to interview anyone he could find who had actually known Malcolm X. His goal was ambitious: to transform what would become dozens of interviews into an unprecedented portrait of Malcolm X, one that would separate fact from fiction. Introduced by Payne’s daughter and primary researcher, Tamara Payne, The Dead Are Arising is a riveting work that affirms the centrality of Malcolm X to the African American freedom struggle.

“It was obvious to us early on that The Dead Are Arising was special, but it seems especially important as of late, given this year’s civil unrest,” said Troy Juliar, Chief Content Officer for RBmedia. “We feel privileged to bring this definitive work of nonfiction to the world on audio at a time when it has never been needed more. Les Payne and his daughter Tamara Payne earned their seat at the National Book Awards table.”

This year’s National Book Awards finalists also included RBmedia titles Deesha Philyaw’s The Secret Lives of Church Ladies (Tantor Media) and Claudio Saunt’s Unworthy Republic: The Dispossession of Native Americans and the Road to Indian Territory (HighBridge). The 2020 National Book Awards winners were, for the first time ever, announced via a live streamed ceremony on November 18.