Many people—when faced with a suspected evil that may harm others—would rather look the other way and get on with their lives, but what if that evil lives right next door? In Hannah Boggs’ newest book, readers get to enjoy a thrilling tale that demonstrates the resolve of even the weakest among us. 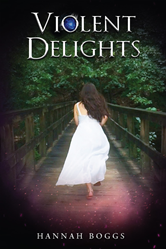 Adrenaline pumped in her veins, a sudden burst of energy filling her body…Odette wanted to scream. She wanted to tear her hair out and throw herself into the sea. Maybe that would purge her of the feeling of sickness that was plaguing her. The horrors that she had to see.

Violent Delights by Hannah Boggs shares the experiences of Odette Sinclair, a teenage girl who feels trapped by the strict rules of her medical condition. Upon moving to a new town with her mother and father, she encounters strange people and events that add color and excitement to her usually boring life, which she gladly welcomes as someone who rarely leaves home. Odette meets her new neighbors, the mysterious Mages twins and their family, and stumbles upon a dark mystery that she desperately needs to solve.

“Odette could see the shadows of the trees through her eyelids. The sun was harsh but she didn’t care at the moment.” Odette Sinclair, the protagonist, often feels overprotected by the adults around her, be it her parents, doctors, or therapist. This makes her more appreciative of nature despite her former disdain toward the outdoors. “She felt so refreshed, especially when the wind would pick up, blowing her hair across her face. For now, she could relax. No doctors, no one worrying about her…not yet anyway.”

Odette is then given a closer look into the lives of her neighbors as they befriend her, but she is plagued by gruesome nightmares indicating the Mages twins as evil and dangerous forces to be dealt with. It doesn’t help that she uncovers a journal from the previous owner of her new home filled with theories of the twins’ involvement in witchcraft. The more time she spends with the twins, however, the more unfortunate events happen to her. From attempted mugging to run-ins with a corpse just near her home, Odette’s luck changes for the worse and ultimately rocks her to her core.

The moment Odette figures out the truth, she must run for her life and endure the pain of losing everything she loves to a man’s obsession and emotional instability. “Adrenaline pumped in her veins, a sudden burst of energy filling her body…Odette wanted to scream. She wanted to tear her hair out and throw herself into the sea. Maybe that would purge her of the feeling of sickness that was plaguing her. The horrors that she had to see.” The author describes the teen girl’s struggle as she tries to escape from her toxic relationship after learning the truth about the Mages twins. She runs for help, but ultimately, she would need to make a deal that may cost her soul.

Hannah Boggs is a high school senior and resides in South Point, Ohio. Violent Delights is the first of a planned three-part series and was written when she was just as a sophomore.