Living in the countryside is often described as quiet, simple, and ordinary, but Willard Jackson’s book says otherwise. From the perspective of an unexpected observer, this book narrates exciting yet true stories about life on a North Dakota prairie farm. 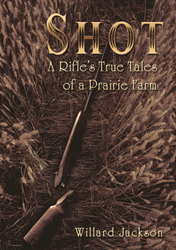 “Every farm has unique and sensational moments. They come to life with the farmer’s rumination. While plowing the North Forty, or ‘driving’ cows down the lane, or waiting out a long winter, farmers have time to reflect and recognize the intrigue of their seemingly routine work.”

Willard Jackson narrates tales about life on a prairie farm in the mid-twentieth century. The stories are told from an unusual perspective—that of the farmer’s rifle, a model 67 Winchester .22 caliber long-barrel rimfire rifle named Shot. As the rusted, broken firearm relates these stories, readers have a rather intimate close-up of what happens on the farm not just daily, but also on dramatic occasions.

Shot describes the farm, the people who run it, and even the animals that are part of its daily operations. Rudy, Shot’s marksman, owns and manages the farm.. He embodies the typical disabled veteran who carves out a simple life with his family after serving in World War II. The rifle describes Rudy as a persistent, creative man of character who diversified his farm to transform it into a successful operation.

While conveying the drama of farm life, Jackson subtly describes the relationships of Rudy’s family members with one another, with the farm employees, with the animals they raise, and even with people of the town, whose roots were originally in another continent. He also emphasizes the genuineness of each event, going as far as inserting footnotes on almost every page so readers who are unfamiliar with jargon used in farming can easily visualize the events.

Shot details a few of the perks of farm life, such as food made with the freshest ingredients and rewards of toiling in the fields, daily chores, and seasonal projects. However, the book also depicts hardships to overcome and the sacrifices needed to make the farm work. Interactions with animals—domestic and wild—are especially noteworthy. What outsiders may see as cruel, for Rudy, his family, and his employees is simply life faced on the farm. It is their reality, and it is something they never question.

“Because their actual experiences are genuinely remarkable, farmers rarely contrive their stories. They can speak forthrightly because, as the saying goes, ‘Truth is often stranger than fiction.’”