An Express Employment Professionals survey reveals most businesses do not expect a recession in the next six months. 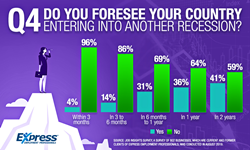 The people we talk to don’t see a recession any time soon. Right now, the job market is strong. So, the most important thing is not to let our fears launch a recession. - Express CEO Bill Stoller

An overwhelming majority of business leaders surveyed in a new Express Employment Professionals poll don’t expect a recession within the next six months, despite increased media focus on the possibility of an upcoming downturn.

In addition, only 5% of respondents say they live in an area that is currently in recession.

Express Employment Professionals franchise owners warn that fear of a recession may actually be what triggers one.

“In a consumer driven economy, recessions can be a self-fulfilling prophecy,” said Brian Baker, a franchise owner in Portland, Oregon. “If you expect a downturn, you stop spending and investing. When enough people stop spending, the economy suffers.”

“The worry is that talk of a recession will lead to a drop in consumer spending and business investment,” he said. “There is still a lot of gas in the U.S. economy. Employment is high, and wages are climbing. I fear the hype is going to squash consumer confidence.”

“We are not worried in our territory,” he said. “The last recession was preceded by most of our lumber mill clients slowing down significantly, then our steel mill did a large layoff. This was 14 months before the recession was actually here. We continue to see endless positions posted locally and a competitive recruiting market between the mills. I see our territory staying strong through the election cycle in 2020.”

John Dickey, an Express franchise owner in Wakefield, Massachusetts, isn’t so sure.

“Tariffs are affecting our customers daily, and they are holding off on adding additional headcount in order to keep their costs as low as possible,” he said. “The job numbers also are decreasing every month. But the most noticeable sign is the manufacturing index that has dropped below 50.”

“The tariff war with China is a new thing that we’ve never experienced before,” she said “I think we are seeing the effects of it bleed a little through the economy. Overall, I think 2020 will be a good year.”

“The people we talk to don’t see a recession any time soon,” said Bill Stoller, CEO of Express. “There are some signs of an overall slowing of the economy—but a slowdown and a recession are two different things. Right now, the job market is strong. So, the most important thing is not to let our fears launch a recession.”

About the Survey
In August 2019, Express Employment Professionals surveyed 802 business owners, decision makers and human resource professionals about the overall national hiring trends in the market today and how their business is impacted. Respondents are current or former Express clients.