Through this new publishing partnership, Recorded Books will produce and distribute a series of original audiobooks for Sanderson’s new works, including the fall 2020 release of The Original. 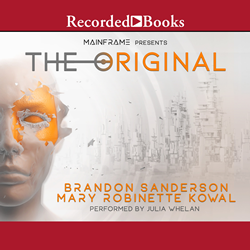 Elevating the work of creators—like Brandon and Max—who think and write “audio first” is what we do.

Releasing this month, The Original is the first title of the collaboration and is co-written by Brandon Sanderson and Mary Robinette Kowal, Hugo and Nebula Award–winning author of the Calculating Stars series.

The Original is a sci-fi thriller set in a near future version of our world where humans are essentially immortal. This immortality, however, comes at a price—the loss of personal privacy. Civil liberties have been supplanted by ubiquitous nanite surveillance and a societal obsession with infinite life. The story takes place over the course of four days and revolves around the murder of a man named Jonathan Winseed by his wife Holly. After she goes on the run, a “provisional replica” of her is created, and a hunt begins. To what lengths will the “new” Holly go to hunt down her original, and keep herself alive?

“I’m excited to introduce Mainframe and to bring our first project, The Original, to the world with our launch partner Recorded Books,” said Sanderson. “Co-writing this story with Mary Robinette Kowal and collaborating with Max, the Mainframe team, and our narrator Julia Whelan was a wonderful experience and I’m very pleased with how it all turned out.”

“I’m very grateful to partner with Brandon on Mainframe and to be able to bring these amazing worlds and stories to audiences everywhere in a medium that has always spoken to me deeply,” said Epstein.

“Brandon has always understood how to create and write for audio—it’s how he tells his stories,” said Troy Juliar, Chief Content Officer for RBmedia. “Elevating the work of creators—like Brandon and Max—who think and write “audio first” is what we do. We put them—and others like them—at the forefront of our publishing effort, producing captivating audio experiences that bring more and more fans to the medium. This is a recipe for successful collaboration.”

Beyond The Original, Recorded Books and Mainframe will release two audio-first additions to Brandon Sanderson’s multifaceted Dark One series. The first project is a fantasy true crime investigative series and the second is an audio-first novel. Sanderson recently launched the Dark One property as an acclaimed graphic novel from Vault Comics, and it is also in development for television with FremantleMedia North America and Random House Studio. Recorded Books is also partnering with Mainframe to publish a new audio novella set in Sanderson’s Stephen Leeds universe, previously known as Legion. The Legion series has been optioned by Cineflix Media, a global media production and distribution company.

The Original by Brandon Sanderson and Mary Robinette Kowal is available for preorder now. The audiobook will be released on September 14, 2020, and will be available exclusively in audio for a twelve-month period. Download it on Audible, iTunes, Google Play, Audiobooks.com, and wherever digital audiobooks are sold.

RBmedia is a global leader in spoken audio content and digital media distribution technology that reaches millions of consumers—at home, in the car, and wherever they take their mobile devices. RBmedia produces exclusive titles and delivers the finest digital content through its platforms, including Audiobooks.com. Headquartered in Landover, Maryland, the company is the largest producer of audiobooks in the world with a catalog of more than 45,000 exclusive titles through its content brands: Recorded Books, Tantor Media, HighBridge, Kalorama Audio, ChristianAudio, Gildan Media, GraphicAudio, W. F. Howes in the United Kingdom, and Wavesound in Australia. RBmedia is owned by KKR, a leading global investment firm. Find out more at rbmediaglobal.com.

Mainframe, LLC is a spoken word entertainment and production company founded by Brandon Sanderson and Max Epstein to tell compelling original stories in audio-first formats. The partnership emerged out of Brandon and Max’s shared desire to tell unique stories that touch audiences in ways beyond that of the written word.

Brandon Sanderson is the most popular fantasy author of his generation and one of the top-selling authors in audio currently publishing today. He has sold over 18 million copies of his work, including 4 million copies in audio. His ongoing Stormlight Archive and Mistborn series have sold many millions of copies in print, eBook, and audio. His other published works include the Skyward, Reckoners, and Alcatraz YA series, Elantris (2005), Warbreaker (2009), and many more.