Recorded Books, Inc. and its family of companies take home three wins at the 2016 Audie Awards. 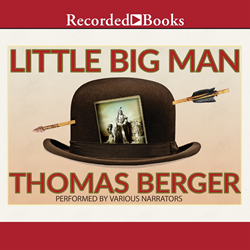 The Audio Publishers Association (APA) awarded Recorded Books, Tantor Media and christianaudio three wins at the 2016 Audie Awards held May 11 at the Adler Planetarium in Chicago.

LITTLE BIG MAN won for the Literary Fiction & Classics category. Published by Recorded Books, written by Thomas Berger, and narrated by Scott Sowers with cameos by David Aaron Baker and Henry Strozier, LITTLE BIG MAN is an epic account of the American West and one man’s extraordinary double life.

THE HIGHWAYMAN was the winner in the Romance category. Published by Tantor Media, written by Kerrigan Byrne, and read by Derek Perkins, THE HIGHWAYMAN is the first in the To Tempt a Highlander series featuring wily widow Farah and dangerously sexy Dorian.

THE BOY BORN DEAD won in the Inspirational/Faith-Based Non-Fiction category. Published by christianaudio, written by David Ring, David Wideman and John Driver, and narrated by Paul Michael, THE BOY BORN DEAD is a story of friendship, courage and triumph featuring a boy, literally born dead, who survives with sobering consequences.

“Our family of companies brings diversity to the audiobook industry, and we are pleased to be honored by the APA for excellence in audiobook narration,” said Ed Longo, chief operating officer at Recorded Books. “With our recent acquisition of christianaudio, Recorded Books continues to grow its extensive catalog of audiobook titles, and we look forward to what’s in store for the future.”

“The breadth of our content offerings across the Recorded Books companies allows us to publish authors of nearly every type and appeal to listeners of nearly every type. We will always work to serve this family of authors by marrying their work with the best narrators and the highest quality recordings,” said Troy Juliar, Recorded Books’ chief content officer. “We honor the authors who put their stories on the page and the actors who bring their stories to life. Congratulations go out to all of the Audie Award winners.”

For 2016, three new awards were added for Excellence in Design, Marketing, and Production. Award-winning stand-up comedian and author Paula Poundstone emceed the event, which marked the 21st Annual Audies Gala.

Recorded Books and its family of companies, including Tantor Media, HighBridge Audio and christianaudio, received 25 nominations for the 2016 Audie Awards.

For more information or to purchase any of our award winners and nominees, visit http://www.recordedbooks.com. To view the complete list of winners, click here.