Recorded Books is the audio publisher of this year’s Newbery winner, among other Youth Media Award Honor Books. 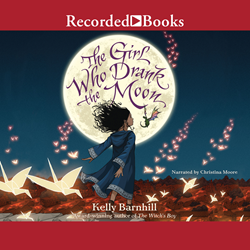 What a pleasure and privilege it is to work with so many of the talented people honored at the 2017 ALA Youth Media Awards!

Recorded Books Inc. is the audio publisher of this year’s Newbery Medal winner. Recorded Books also published audio titles honored with numerous other awards, including Honor Books. The 2017 Youth Media Award winners were announced this morning by the American Library Association (ALA) during a presentation at ALA’s Midwinter Meeting & Exhibits in Atlanta, Georgia.

The Girl Who Drank the Moon by Kelly Barnhill

They All Saw a Cat by Brendan Wenzel

Freedom Over Me: Eleven Slaves, Their Lives and Dreams Brought to Life by Ashley Bryan

Dream On, Amber by Emma Shevah, narrated by Laura Kirman

“Recorded Books prides itself on both the quality of its production and the excellence and diversity of the children’s titles we record. What a pleasure and privilege it is to work with so many of the talented people honored at the 2017 ALA Youth Media Awards!” said Melanie Donovan, Recorded Books Director, Children’s Acquisitions.

For more information on the ALA Youth Media Awards and Notables, please visit http://www.ala.org/yma.

To purchase any of the above award winners on audio, visit the Recorded Books website. To view a complete list of the 2017 Youth Media Award winners, visit ala.unikron.com/2017.