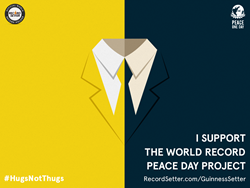 "As Guinness World Records' main competitor, we're inviting them to partner on a world record in the name of peace."

RecordSetter, the largest US-based world record organization, has issued a proposal of peace to Guinness World Records. In honor of Peace Day, taking place on September 21, the upstart brand has invited its British rival to put aside past disputes and collaborate on a “GuinnessSetter World Record.”

“Let’s meet in Las Vegas on Peace Day and co-host a massive world record, designed to raise funds and awareness for Peace One Day,” writes RecordSetter in an open letter to Guinness, posted at RecordSetter.com/GuinnessSetter. “In the name of peace, let’s invite people to break the record for Largest Group Piggyback Hug, which currently stands at 32 pairs.”

The letter goes on to suggest that the record, which would be adjudicated by officials from both organizations (“Double adjudication!”), would also be an opportunity to raise funds and awareness for Peace One Day. “We’ll donate $1 to Peace One Day on behalf of every participant,” proposes RecordSetter. “We hope you’ll follow suit and match us.”

Inspiration for the project came from Burger King’s recent McWhopper campaign, in which the restaurant chain invited McDonald’s to co-create a Peace Day sandwich and donate the proceeds to charity.

“I have utmost respect and admiration for the Guinness brand,” said Dan Rollman, Founder and CEO of RecordSetter. “That said, we've had differences in the past. As Guinness World Records' main competitor, we're inviting them to partner on a world record in the name of peace.”

About RecordSetter:
Founded on a belief that “Everyone can be world’s best at something,” RecordSetter is a global media company that celebrates the best in human achievement. RecordSetter's 40,000 world record videos generate over 10 million monthly views. The company co-produces "RecordSetter Kids" with DreamWorksTV, has a series in development with Warner Horizon Television, and has provided videos to BuzzFeed and The Huffington Post. RecordSetter also creates branded content for clients including Kraft, PepsiCo, Heineken, Toyota, JetBlue and Hasbro. For more info, visit RecordSetter.com.