Recosoft Corporation creators of workflow automation software and plug-ins for the Adobe® Creative Cloud® platform, and developers of PDF conversion tools has released ID2Office 2021; the newest version of the InDesign to Word, PowerPoint and Keynote conversion solution for Adobe InDesign® 2021. 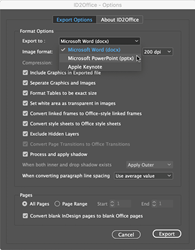 Over the years our customers have requested improved graphics separation and the capability to process right-to-left languages such as Arabic and Hebrew. With ID2Office 2021, we were finally able to meets these needs -Paramjit Chadha, MD, Recosoft Corporation

ID2Office 2021 now supports and integrates with InDesign 2021. InDesign CC through 2020 are supported as well.


Images are now separated as much as possible resulting in converted files having images that can be manipulated.


InDesign vector graphics such as rectangles, lines, ovals, and polygons along with the respective properties are converted to Word, PowerPoint and Keynote vector graphics.


Hyperlinks and local links are now supported and converted to equivalent links in resulting Word/PowerPoint file.


Paragraph properties such as borders, shading and rules are now processed, and equivalent properties are made in the converted file.

ID2Office 2021 is available immediately in the following configurations from the Recosoft web store (per license):