Performers included firefighters and first responders who played their bagpipes and drums for communities across the state and an ICU nurse whose voice was the sound of caring during the pandemic. 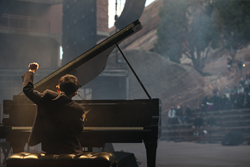 Raditya “Rad” Muljadi is an 11-year-old fifth-grader from Parker, CO. His performance at Red Rocks was a showstopper, as he wowed and inspired the crowd of 2,500 attendees.

For more than eight decades, Red Rocks has hosted the biggest acts in music history, but few performances had more heart on stage than what we saw tonight.

Colorado’s iconic Red Rocks Amphitheatre paid tribute to its 80th Anniversary season on April 28, not with one of the venue’s usual platinum-selling headliners, but with a roster of acts that performed throughout the COVID-19 pandemic for those in nursing homes, intensive care units, churches and front yards.

Among those performing were firefighters and first responders who played their bagpipes and drums for communities across the state and an ICU nurse whose voice was the sound of caring during the pandemic.

Denver Mayor Michael B. Hancock welcomed the crowd of 2,500 in recognition of the historic venue’s 80th anniversary. Additionally, the event featured an “8 o’clock howl,” a literal howl from all 2,500 people in the venue. The howl was led by the Denver couple who spurred the vocal thank-you ritual last year in appreciation of frontline workers.

“For more than eight decades, Red Rocks has hosted the biggest acts in music history, but few performances had more heart on stage than what we saw tonight,” said Ginger White, executive director of Denver Arts & Venues, the city agency that operates the venue. “There are so many caring musicians who lifted our spirits in surprising ways throughout the pandemic, and we wanted to thank them all with the representatives in this show.”

A number of seats were filled by frontline workers including those who work in grocery stores, public safety and COVID-prevention services. Tickets to the concert sold for 80 cents (the cost of a show at Red Rocks in 1941) in honor of the venue’s 80th anniversary.

Artists were selected based on recommendations from music and news journalists, whose coverage of these musicians put a spotlight on their musical notes from across Colorado. Performers included:

Rico Jones is a saxophonist from Denver who during the pandemic, hosted concerts for the local community from his front porch. He performed at Red Rocks with a five-piece band.

Raditya “Rad” Muljadi is an 11-year-old fifth-grader from Parker who started getting serious about playing piano at age four and is now a piano prodigy.

Wrapping up the night’s performances was the D’Evelyn Jr-Sr High School Marching Band. Their music played on during the pandemic in the “Parade Across America” on Inauguration Day.

As the pandemic bore down on the world, entertainment venues went silent, yet the music played online. The performance of JoFoKe, Shane Endsley and Adam Waite represented all musicians.

As an ICU Nurse at UC Health, Emily Worthem’s voice was often the only sound patients in the unit could hear. Her singing was part of their care.

Colorado Emerald Society Pipes and Drums is a group of bagpipers and drummers composed of fire fighters and first responders whose Sunset Solidarity program was heard in communities across Colorado.

The Longmont High School drumline is a top-15 nationally ranked drumline that had to record their final performance earlier this month and submit it as part of the world championships.