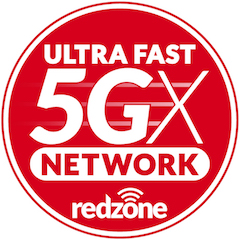 Redzone’s strategy is to reduce the amount of fiber infrastructure needed to deliver the high speed wireless signal, thus reducing the cost. That's where the Redzone’s 5Gx architecture comes in. This technology allows fiber connected towers to be linked via powerful microwave radios to additional transmitters on towers without fiber. So instead of deploying radios on 500 towers and running fiber to each of these sites, Redzone can deploy clusters of towers serving broadband to thousands of homes across a region from a single fiber optic link.

Redzone’s 5Gx architecture doesn't completely do away with the need for fiber backhaul. The wireless service still needs a core network of fiber connections. But it greatly reduces the number of towers that require fiber. And this saving goes far beyond the initial 90% lower capital cost of building fiber. Redzone can also reduce the time to deliver broadband to an entire community by 90% versus a comparable fiber optic network.

“Reliance on wired networks is an antiquated model for the future of broadband in Maine. Redzone’s network combines existing middle mile fiber networks with the most advanced 4G & 5G wireless technology to extend sustainable broadband further into underserved areas,” said Michael Forcillo, Executive Vice President of Redzone Wireless. Redzone is executing its 2019 network expansion plan, and we are grateful for the opportunity to deliver true broadband to thousands of new homes and businesses in Windham and New Sharon.”

Redzone offers a range of broadband plans and price options – including the most popular among Maine cord cutters providing FCC recommended 25 Mbps download speeds, with no contracts or installation fees. Complete service information and special offers are available at http://www.redzonewireless.com.