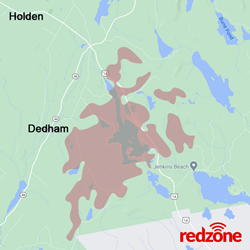 Redzone’s new broadband site is located on Bald Mountain in Dedham. The site was selected based on its elevation and proximity to hundreds of locations with inadequate and/or unaffordable broadband service options.

“Redzone identified an excellent opportunity to provide fast, reliable and most importantly, affordable broadband access to the Dedham community, ” said Jim McKenna, Redzone Wireless President. “This is our first site in the Dedham area, and it enables us to provide much needed broadband to a community where we have received hundreds of requests for service. I commend our team for completing the project in less than 90 days,” added McKenna.

Recognizing cost among the primary factors limiting broadband access in Maine, Redzone is committed to providing the most affordable True 25 Mbps broadband service to as many Maine families as possible for under $50 per month - at least 25% less than traditional wired alternatives.

Recent research published by BroadbandNow indicates that less than 5% of Maine households have access to broadband for less than $60/mo.

Interested Dedham area residents can quickly qualify their location for service at http://www.redzonewireless.com.

The FCC standard is supported by a Princeton and University of Chicago study published in August 2019 by the Wall Street Journal confirming that speeds of 25 Mbps exceed residential broadband requirements by a substantial margin.