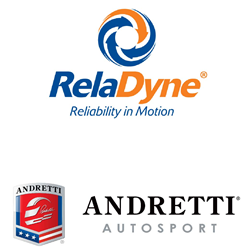 We are pleased to partner with such a reputable brand for this year’s events at the Indianapolis Motor Speedway. - JF Thormann, Andretti Autosport President

The No. 27 Mazda of Nico Jamin will have a different look when it takes to the Indianapolis Motor Speedway next week for the INDYCAR Grand Prix. Cincinnati-based national lubricants and fuel distributor, RelaDyne, will add its blue and red colors of its automotive brand, DuraMAX, to the Frenchman’s car for both the Grand Prix and Freedom 100 later this month.

DuraMAX, Powered by RelaDyne, is one of the fastest growing new automotive brands in the United States. In addition to DuraMAX automotive products, RelaDyne provides commercial and industrial lubricants and equipment reliability services to more than 13,000 clients based on a foundation of partnerships as a true, trusted advisor. With qualities and products that align with Andretti Autosport and the team’s success on track, this partnership introduces a high-quality brand into a high-performance motor sport.

“We are pleased to partner with such a reputable brand for this year’s events at the Indianapolis Motor Speedway,” said Andretti Autosport President, JF Thormann. “Nico, along with our whole Indy Lights program have already shown a great amount of success this season and we are determined to carry that success on through the month of May. We welcome DuraMAX into Indy car racing and are proud to help them build from a regional brand to national recognition.”

“RelaDyne’s partnership with Andretti is a natural evolution of our DuraMAX brand,” said Larry Stoddard, RelaDyne President and CEO. “Andretti Autosport stands for integrity, trust, and performance. These core values align perfectly with the marketing pillars of our DuraMAX brand. On behalf of all RelaDyne Associates, we are excited to see the No. 27 DuraMAX Powered by RelaDyne car at the speedway.”

“Our DuraMAX brand is one of the fastest growing installed engine lubricants in the United States,” said Dan Oehler, RelaDyne Vice President of Sales and Marketing. “Showcasing our brand at the Indianapolis Motor Speedway with Andretti Autosport is a strong step for DuraMAX. In addition, our investment into our DuraMAX product portfolio in both technology and imaging will also be highlighted in use by the race team.”

Based in Indianapolis and led by racing legend Michael Andretti, Andretti Autosport boasts a wide racing portfolio rooted in tradition and designed for success. Together with Andretti Formula E and Volkswagen Andretti Rallycross, Andretti Autosport fields multiple entries in the IndyCar Series, Indy Lights and the Pro Mazda Championship, along with entries in the FIA Formula E Championship and Global Rallycross. The company boasts four IndyCar Series championships (2004, 2005, 2007, 2012), two Indy Lights titles (2008, 2009), one Pro Mazda championship (2013) and one USF2000 championship (2010) and has captured victory at the famed Indianapolis 500 three times (2005, 2007, 2014). Additionally, the team holds two X Games Gold Medals (2014, 2015) and one Global Rallycross championship (2015). To share in the Andretti story, please visit online at http://www.AndrettiAutosport.com and follow along on Twitter via @FollowAndretti.

About DuraMAX, Powered by RelaDyne