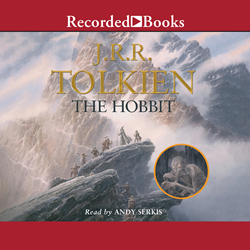 Andy Serkis skillfully regales the adventures of Bilbo Baggins that will excite fans new and old.

Andy Serkis has earned acclaim from both critics and audiences for his work in a range of memorable roles. He gained legions of fans around the globe for his performance as Gollum in the Academy Award®-winning The Lord of the Rings movie trilogy, directed by Peter Jackson.

“I have such vivid memories of first reading The Hobbit, when I was on the bus going to school, aged about 9 or 10,” said Andy Serkis. “It was the first ‘grown up’ book I remember reading, and I’d often miss my stop because I was so engaged in the thrust and power of its storytelling, the beautifully drawn characters, the majesty of the epic journey. To now narrate the audiobook version of this fantastical tale of Middle-earth and its inhabitants—and to bring them to life for Tolkien fans in the U.S. and Canada—is such a wonderful, full-circle opportunity!”

This audiobook version will be a new contemporary reading of The Hobbit to complement the classic recording narrated by Rob Inglis. The prelude to The Lord of The Rings, The Hobbit follows the journey of Bilbo Baggins as he attempts to raid the treasure hoard of Smaug the Magnificent, a large and very dangerous dragon. It has sold many millions of copies since its publication in 1937, establishing itself as one of the most influential books of the 20th century.

“More than 80 years after its original release, The Hobbit remains one of the most timeless ‘hero’s journey and quest stories’ in all of literature,” said Troy Juliar, Chief Content Officer for RBmedia. “Andy Serkis skillfully regales the adventures of Bilbo Baggins that will excite fans new and old. We are honored to be the publisher that refreshes this legacy for a whole new generation.”

The Hobbit, read by Andy Serkis, is available for preorder now. The Recorded Books audiobook will be released in North America on September 21, 2020 for digital download on Audible, iTunes, Google Play, Audiobooks.com, and wherever digital audiobooks are sold. It will also be available on CD from various retailers. This new audiobook is the first of many new releases that are reinvigorating The Hobbit and Lord of the Rings legacies, including a new Lord of the Rings television series set for release by Amazon.

RBmedia is a global leader in spoken audio content and digital media distribution technology that reaches millions of consumers—at home, in the car, and wherever they take their mobile devices. RBmedia produces exclusive titles and delivers the finest digital content through its platforms, including Audiobooks.com. Headquartered in Landover, Maryland, the company is the largest producer of audiobooks in the world with a catalog of more than 45,000 exclusive titles through its content brands: Recorded Books, Tantor Media, HighBridge, Kalorama Audio, ChristianAudio, Gildan Media, GraphicAudio, W. F. Howes in the United Kingdom, and Wavesound in Australia. RBmedia is owned by KKR, a leading global investment firm. Find out more at http://www.rbmediaglobal.com.

ANDY SERKIS is an award-winning actor who has earned acclaim from both critics and audiences for his work in a range of memorable roles. He gained legions of fans around the globe for his performance as Gollum in the Academy Award®-winning The Lord of the Rings trilogy, directed by Peter Jackson. Serkis won an Empire Award for his role, in addition to sharing in several Outstanding Ensemble Cast Awards, including a Screen Actors Guild Award®. He reunited with Jackson in the director’s epic retelling of King Kong, taking performance capture to another level as the title character of Kong.