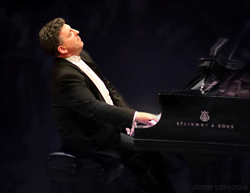 World-renowned pianist and composer Jeffrey Biegel has announced the October 7th premiere of a brand-new work by Ellen Taaffe Zwilich honoring the late Supreme Court Justice Ruth Bader Ginsburg to be performed by the Dallas Symphony Orchestra at the Morton H. Meyerson Symphony Center in Dallas, Texas, as a part of its 2021/2022 season. Zwilich, a Pulitizer Prize winning composer for Music, will be joined on piano by Biegel, the project’s coordinator, as well as by Grammy-winning mezzo-soprano Denyce Graves.

“I’m tremendously excited to know that such a brilliant symphony orchestra will perform what I know will be hailed as an important piece of music,” says Biegel. “And I couldn’t think of two better talents than Ellen and Denyce to be involved with it. Ellen has already composed two other pieces for me, and when I asked her to write a tribute to Ruth Bader Ginsburg, she said she got goosebumps. She wanted to do it immediately.”

Biegel notes that when he approached Ginsburg’s son, Jim, and asked him whom he would recommend to sing the piece, without hesitation he requested Denyce Graves. “Denyce was one of Ruth’s favorite singers,” Biegel explains. “In fact, Denyce sang at her memorial service. When I asked her if she wanted to be involved with this new work, she said, ‘For Ruth? Of course.’”

Concertgoers at the October 7th program will receive an added bonus, as it will mark the world premiere of Biegel’s composition, “Reflection of Justice: An Ode to Ruth Bader Ginsburg,” for piano and orchestra, immediately following Zwilich piece. Biegel will return to the piano for the performance, and the selection (which will feature orchestrations composed by Harrison Sheckler) will be conducted by Lidiya Yankovskaya.

Originally, Biegel composed “Reflection of Justice: An Ode to Ruth Bader Ginsburg” as a gorgeous, neo-Impressionistic solo piano piece. “I felt a strong connection to her,” he explains. “My father-in-law knew her when they grew up in Brooklyn. I feel as if I know her, too, in spirit.

“It is important to me that people get a sense of who Ruth was when they listen to the music,” Biegel continues. “It’s soft in places, like her voice, but it gets stronger and stronger – it builds as if she were presenting an argument. There are two major climaxes, and I put the first words of the ‘Star-Spangled Banner’ in there. The solo piece is created by transposing Ruth’s name, her initials as well as her nickname, Kiki, to their musical equivalents. So while you listen, you’re really going to feel her presence, even on a subconscious level.”

As a final touch, Biegel includes two loud chords that require the entire length of the arm, from elbow to wrist. “They represent the long arm of the law,” he notes. “I thought that was an appropriate touch.”

Biegel has also been hard at work organizing the upcoming Rhapsody in Red, White & Blue project to commemorate the centennial celebration of George Gershwin’s iconic Rhapsody in Blue. He commissioned noted composer and conductor Peter Boyer to create a brand-new “rhapsody,” which will be performed in 2024, intended for all 50 states with a different orchestra per state. “This is a very exciting undertaking and a labor of love for both Peter and me,” says Biegel, who will perform on piano with each orchestra on the tour.

In addition to his ongoing work as on the piano faculty at the Brooklyn Conservatory of Music at Brooklyn College, Biegel has been performing regular livestream piano concerts from his home during the pandemic. Available on his YouTube channel, the repertoire spans Bach to the present. “I like to mix things up,” he says. “There are Mozart sonatas, Chopin, Prokofiev, Rachmaninov, and also and also Neil Sedaka’s concerto ‘Manhattan Intermezzo’ and more. I like to do it all. Playing different styles helps to make me a better musician.”

Biegel is no newbie when it comes to livestream concerts; in fact, the self-described “throwback to the past, pioneer on the internet” created the first classical livestream concerts back in 1997, which were then presented on the Real Networks platform. “The technology was obviously primitive then compared to what we can do now,” he says, “but I thought it was important to bring this music directly to the people. It was the first time music fans could see a classical concert on their computers.”

He laughs and adds, “It’s kind of funny. My way of embracing both the past and the future predated everything musicians have been doing during the pandemic. I’ve been called ‘neo-Renaissance,’ which sounds pretty nice. I’ll take it.”