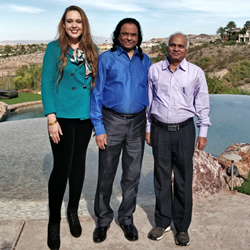 "Dr. Jadhav’s personal validation brings feelings of increased pride to be associated with Guruji Mahendra Trivedi and the miracles of the Trivedi Effect!” — Johanne Dodon

Dr. Jadhav spoke about all the positive effects of the Trivedi Effect® on the various crops and described his findings related to each crop. He described the results related to the mustard crop that grew in an area that mustard typically would never grow as a miracle. Even Guruji Mahendra Trivedi did not know the seed germination in the area of the plantation was historically zero percent when he blessed the mustard seeds. Dr. Jadhav was astounded and said, “When the mustard yielded 500 times the typical results, that is a miracle!”

These unprecedented findings were presented by Mr. Trivedi at The American Society for Horticultural Science 108th Annual Conference on Sept. 25-28, 2011 in Waikoloa, Hawaii, USA.

To Watch the Replay: https://www.youtube.com/watch?v=NgWchRjG-Ug

Dr. Jadhav authored an extensive report about the unprecedented data derived from the mango crop results. The following is an excerpt from his report:
“It is a miracle that the same trees, which were having a spongy tissue disorder since the last 32 years, were completely transformed after Guruji’s blessings. The plot treated by Guruji was absolutely free from the spongy tissue and there were no signs of any disease or pest’s attack, no airborne infection too. Interestingly, no additives like pesticides, fungicides or organic material were added to the treated plot. Scientists all over the world are working to solve this problem, but they could not completely eradicate the same.

There was another very important factor, which is way beyond the limits of science. When Guruji treated the trees on 12th December 2005 they had already started flowering in the month of September. According to the laws of nature, two to three months before the flowering start, the tree itself designs the program of flowering period, fruiting period and the final produce in terms of quality and quantity.

So, if any treatment is given during or after flowering, it will not be effective because of the pre-determined program of a tree. But after Gurujis blessings, all the 55 trees were completely transformed even though they had already started flowering in the month of September. This can be accomplished by working only at the DNA level. Being a witness to this phenomenon which is unknown to the science, I conclude that only supernatural power has the capacity to erase the old program of any tree and reprogram it with a new one. And only Guruji has the capacity to regulate and control this supernatural power -Life Energy for getting such an astounding and miraculous result.”

View the Publication on Mangoes: https://www.trivedieffect.com/the-science/publications/plant-genetics-publications/morphological-characterization-quality-yield-and-dna-fingerprinting-of-biofield-energy-treated-alphonso-mangomangifera-indica-l/

View the Publication on Cashews: https://www.trivedieffect.com/the-science/publications/plant-genetics-publications/effect-of-biofield-energy-treatment-on-chlorophyll-content-pathological-study-and-molecular-analysis-of-cashew-plant-anacardium-occidentale-l/

View the Publication on Seeds: https://www.trivedieffect.com/the-science/publications/plant-genetics-publications/agronomic-characteristics-growth-analysis-and-yield-response-of-biofield-treated-mustard-cowpea-horse-gram-and-groundnuts/

Participants, in this workshop, shared their comments about Dr. B.B. Jadhav’s discourse and how Guruji Trivedi and the Trivedi Effect have impacted them and shared their appreciation and gratitude for the workshop and Guruji Trivedi’s continued support of them and their families:

“To listen to Dr. Jadhav express his personal experience related to the agriculture experiments that we so often heard about was so interesting,” expressed Johanne Dodon. “The genuine witness, truthful reaction, pride, and the authentic validation of such a renowned authority in the subject on the cashew, mango, and other agriculture crops is not only inspiring, Dr. Jadhav’s personal validation brings feelings of increased pride to be associated with Guruji Mahendra Trivedi and the miracles of the Trivedi Effect!”

Kathryn Sweas wrote, “Thank you, Doctor Jadhav for reviewing these science projects with us and teaching and highlighting the significance of the results but also the impact on your heart and mind! You bring me and all of us great confidence and inspiration. Much gratitude for being here with us.”
“The results of the experiments with the cashews, the mangos and the other plants have always been miraculous, but what an amazing added bonus to now hear from the esteemed scientist associated with these experiments and the person who authored these reports., wrote Sheila Benson, who expressed gratitude to Dr. Jadhav. “Thank you for such this fascinating presentation.”

Trivedi Effect Workshops
In each Trivedi Effect workshop, Guruji Mahendra Trivedi bridges the gap between Science and the Divine formulating a Divine Science which gives people practical and timely insights into how to navigate the world and pursue the most optimal life possible. He consistently delivers deep thought-provoking discourses on topics ranging from understanding the human condition, the role of the spirit in transformation, new science for the future, and the value of the development of higher consciousness for a better life. There is a Divine energy transmission at the culmination of each workshop.

To find out more about the science, read testimonials, or join an upcoming workshop, visit http://www.TrivediEffect.com

About Guruji Mahendra Trivedi & The Trivedi Effect®
The Trivedi Effect®, which is an evidence-based phenomenon in which an individual can harness inherently intelligent energy from nature and transmit it to living organisms and non-living materials, anywhere in the world through thought intention, to significantly enhance potency and beneficially alter their characteristics and behaviors through transformation at the atomic, molecular, and cellular levels.

Guruji Mahendra Kumar Trivedi, the founder of the Trivedi Effect®, is on a mission to usher in a new era that integrates science, spirituality, and consciousness to vastly improve the human condition and benefit humanity on a global scale. To date, more than 250,000 people worldwide have benefited from the Trivedi Effect®. His organization, Trivedi Global, Inc., is collaborating with globally renowned product research and development organizations to bring to market proprietary products and therapies in the areas of nutraceuticals, pharmaceuticals, and more.

The Trivedi Effect® has been tested, measured, and validated in over 4,000 scientific experiments globally, by world-renowned scientists and research institutes using the rigor of internationally accepted models of scientific research with the most sophisticated technologies available on this planet. Challenging the known frontiers of science, this research has resulted in over 400 publications in major international peer-reviewed scientific journals with over 4,000 citations.