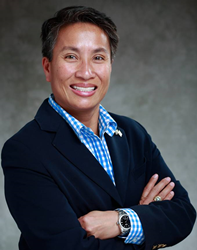 Kim Mitchell, a U.S. Navy Veteran and former Lieutenant Commander with a demonstrated commitment to serving and advocating for veterans, servicemembers, military families and Gold Star Families, has been named Senior Vice President of Military, Veterans and Government Affairs at the private, nonprofit National University, effective March 2020. Ms. Mitchell, who currently serves as President and Chief Executive Officer of Veterans Village of San Diego, is a nationally-recognized leader and advocate for veterans and members of the military, with a career that spans 17 years as a Surface Warfare Officer, which included her final two years in the Navy as the Deputy Director for the Office of Warrior and Families Support, working directly for the Chairman of the Joint Chiefs of Staff.

As Senior Vice President of Military, Veteran and Government Affairs, Ms. Mitchell’s leadership skills and deep knowledge of the military and education sector will catalyze efforts to significantly expand the University’s strong foundations serving military-affiliated students—a group that accounts for approximately 25 percent all its students—with increased support services, strengthened collaborations with industry groups, and an expanded presence in Washington D.C. Ms. Mitchell, who has served as a member of the National University System Board of Trustees for the past two years, has strong ties to the nation’s capital, having also served as a White House Military Social Aide, and she has held civilian nonprofit leadership positions including her service as President and Co-founder of the Dixon Center for Veterans and Military Services. Ms. Mitchell also serves on numerous nonprofit boards including the Infinite Hero Foundation, Hershel Woody Williams Medal of Honor Foundation, Vietnam Veterans Memorial Fund, and the Iraq and Afghanistan Veterans of America Advisory Committee.

“Kim Mitchell is a true role model for all National University students. Her work on behalf of our military-affiliated students will ensure that their unique needs are met and the education they receive aligns strongly with their current career tracks to help them advance professionally in their current capacity, and as they transition to civilian life,” said Dr. David Andrews, President of National University. “Kim’s history of dedication and service to the veterans, the military, and our nation, as well as her years of recognized expertise in the veterans space and governmental affairs, makes her an outstanding choice to help us change the face and pace of higher education for adult learners.”

Serving those who serve and who have served is both a personal and professional calling for Ms. Mitchell, whose life story of having been rescued by a U.S. Air Force Tech Sergeant as an orphaned baby during the Vietnam War and being raised by in the United States, has been featured in national news stories. She has credited her past for defining her purpose in life and bringing her career path into focus. In her capacity as President and Chief Executive Officer of Veterans Village of San Diego, Ms. Mitchell has greatly expanded case management efforts and programming centered around providing ongoing support and services, such as transitional and permanent supportive housing and mental health services, for thousands of Veterans and their families annually. In her new role with National University, she will place her focus more precisely on the educational needs of those who currently serve or have served. Approximately 200,000 service members transition from the military to civilian lives.

“Having served in the United States Navy at a number of different levels, and now as an advocate for Veterans and their families across the country, I know that transitioning back to civilian life, even in a partial capacity, often proves to be quite challenging for service members, veterans and their families,” said Ms. Mitchell. “However, I also know that when we support our service members and veterans with personalized educational opportunities and the accompanying support systems they need to thrive in an ever-changing economy and environment, we set the tone for more successful transitions, better public servants, stronger families, and a stronger country in general.”

Serving those who serve is also a key focus of National University, which offers programs that are easily accessible to those who are currently in the military as well as those that can help with transitioning to civilian careers. National University is a Military-Friendly College that was founded by Dr. David Chigos, a Navy retiree who believed in meeting the needs of working adults through quality education. The flexibility of National University’s “Any Time, Any Place, Any Pace” schedule and programs accommodates deployment schedules of those who serve. National University also offers a dedicated Veteran Center for military-affiliated students to receive support as they transition from military life to higher education, and create connections with fellow active duty, Veteran, reserve, and dependent students.

Also joining the University’s expanding military outreach team, and working closely with Ms. Mitchell, will be U.S. Navy Veteran and Veterans advocate, Steve Borden, who has been named Associate Vice President for Military at National University. Formerly of Arizona State University’s Pat Tillman Veterans Center, Borden is a retired U.S. Navy Captain with more than 29 years of military service. In his new role at National University, he will play a key role, starting December 2019, in building and sustaining meaningful community and civic outreach programs and external agency engagement efforts in support of National University’s vision for military-affiliated students.

National University – which will be changing its name to Sanford National University July 1, 2020 in honor of philanthropist and entrepreneur T. Denny Sanford -- offers a range of programs that are highly popular among those in the military interested in transitioning to civilian careers, including engineering, cybersecurity, nursing, and business degrees. Ms. Mitchell will build on the strong foundation of National University’s commitment to its military and Veteran students to ensure that education is accessible and relevant to their ongoing needs and aligned with industry needs and trends. A strong advocate of lifelong learning, her own educational background includes a Master of Arts in Organizational Management from The George Washington University in D.C., and a Bachelor of Science in Ocean Engineering from the United States Naval Academy, Annapolis, MD. She is a Class of 2019 Scholar in the George W. Bush Presidential Center Stand-To Veterans Leadership Program.