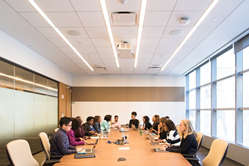 New research, which fills a data void around female self-promotion, found that most women would rather minimize their successes than talk about them.

“It’s worth emphasizing that not only do women avoid self-promotion overall, but they would rather downplay their accomplishments than tout them,” said Amanda Hirsch, founder and president of Mighty Forces.

Today, three women-owned firms, Southpaw Insights, Mighty Forces and Upstream Analysis, unveiled new findings from a national survey focused on the gender “self-promotion gap.” In honor of Women’s Entrepreneurship Day on Nov. 19, the study examined the comfort and propensity of women and men to promote themselves and their accomplishments, finding that women are often more reticent.

The research, which fills a data void around female self-promotion, found that most women would rather minimize their successes than talk about them. The study, which surveyed 1,016 men and women 18 and older, uncovered key trends around leveraging personal success in the workplace. These include:

"We did a nationally representative online survey and followed that up with in-depth interviews. This kind of mixed methodology is really powerful because the stories from the interviews bring the survey findings to life," said Jessica Broome, Ph.D., founder and president at Southpaw Insights. “Our findings illustrate clearly that women find other women’s accomplishments inspiring but would rather downplay their own accomplishments than talk about them.”

Eighty-three percent of women find other women’s accomplishments inspiring, yet survey research found seven in 10 women would rather downplay their accomplishments than promote them. Researchers found this especially troubling when considering the gender pay gap and other professional inequalities.

“It’s worth emphasizing that not only do women avoid self-promotion overall, but they would rather downplay their accomplishments than tout them,” said Amanda Hirsch, founder and president of Mighty Forces. “I expected women to be uncomfortable with anything that feels like bragging, but it troubles me how many of us are more comfortable seeming like less than we are."

Hirsch and Broome also noted that women from different racial and ethnic backgrounds and age groups have different relationships to self-promotion, suggesting that aversion to self-promotion is not an innate, gendered trait but is instead influenced by culture.

In fact, African American (44 percent) and Hispanic (47 percent) women are significantly less likely to downplay their strengths and abilities than white women (60 percent). Women 55 years and older are also more averse to self-promotion than younger women and feel more uncomfortable sharing accomplishments with coworkers. Researchers question if this creates an “inspiration deficit” for young women in search of female role models because older women are declining to share their professional knowledge with women in earlier stages of their lives and careers.

To learn more about the survey research, watch the new “self-promotion gap” survey video, or visit their website: http://www.selfpromotiongap.com.

Women’s Entrepreneurship Day is recognized annually to celebrate, empower and support women in business. Despite all the strides women have made professionally, only 6 percent of Fortune 500 companies are run by women.

About Southpaw Insights
Southpaw Insights uses qualitative and quantitative research methods to help companies understand what people think, feel, and do so they can make smart decisions. http://www.southpawinsights.com.

About Upstream Analysis
Upstream Analysis shows companies and nonprofits how their portrayal in the media influences their image and ability to achieve business and policy goals. http://www.upstreamanalysis.com.