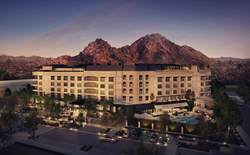 The Global Ambassador in Phoenix

The Global Ambassador is a deeply personal, legacy project for me that furthers my pursuit of combining unmatched hospitality with culinary excellence

One of the industry’s leading restaurateurs and premier hospitality brand developers, Sam Fox, is making his official foray into the luxury hospitality industry with the announcement of his internationally inspired hotel, The Global Ambassador.

Where Phoenix, Scottsdale and Paradise Valley converge, The Global Ambassador will combine a refined and elevated hospitality experience that is created through a global lens and locally connected. Every detail of the well-appointed, 141-room hotel has been meticulously poured over, studied and designed by Fox himself.

Each hallway, tucked-away courtyard and amenity of the Global Ambassador is purposefully designed to elicit one cultivated experience that is rich in charm and sophistication. Upon arrival, The Global Ambassador will exude a vibrant energy with a lively, bustling atmosphere and worldly flair that is carried throughout the hotel.

“The Global Ambassador is a deeply personal, legacy project for me that furthers my pursuit of combining unmatched hospitality with culinary excellence,” said Fox, who will manage, operate and co-develop the hotel under his newly formed Author & Edit Hospitality company. “This is so much more than a hotel – it’s a luxury lifestyle brand that we hope will inspire and draw travelers from all over the world to explore Phoenix in a new way. The Global Ambassador is the natural evolution of my passion for creating memorable hospitality experiences.”

As a dynamic restauranteur, Fox’s stellar lineup of inventive culinary offerings will define The Global Ambassador. The hotel will boast five original dining venues with cuisine influenced by the Mediterranean region including Greece, Italy and Morocco. Most notably within the Global Ambassador will be the largest rooftop restaurant in the state, at 18,000 square feet, that overlooks the iconic Camelback Mountain.

The hotel is oriented around its plaza courtyard with a sprawling lawn accented with lush, verdant landscaping and inviting seating that encourages guests to relax and unwind. The world-class amenity offering includes a Wellness Center complete with an expansive fitness level and ultra-luxe spa where health, beauty and fitness experts will curate treatments and practices designed to put the mind and body in perfect balance. In addition, a Member’s Club will take exclusivity to the next level, which will be the first of its kind in Arizona with limited membership.

“With The Global Ambassador, we are evolving luxury hospitality at every level and from every perspective in order to deliver something truly remarkable for the well-traveled set who is looking to be inspired and intrigued in an authentic and unexpected way,” said Fox. “This is a convergence of significance found in hospitality, wellness and culture.”

Sam Fox is developing The Global Ambassador with his trusted collaborator, business partner and friend Brian Frakes of Common Bond Development Group, a company known for its notable lifestyle development projects. Frakes, who has an extensive background in development, will help bring Fox’s ideas to life by aiding in design, architectural oversight and financial modeling.

Nelsen Partners Architects has been hired as the lead architect, Berghoff Design Group will oversee the landscape architecture and the interiors will be done by Fox’s longtime muse Judi Testani of Testani Design Troupe who has designed the majority of Fox’s projects, both personally and professionally.

This news of Fox’s first hotel comes on the heels of the opening last month of his The Twelve Thirty Club in Nashville that garnered national headlines.

Fox’s venture into hospitality is the culmination of more than 20 years in the restaurant industry and having opened over 100 restaurants of his own, with many more openings planned in 2021. He is an 11-time James Beard Award semifinalist for Restaurateur of the Year, a New York Times best-selling cookbook author and was named one of the 50 most influential people in the restaurant industry by Nation’s Restaurant News for five consecutive years. In 2017, Fox successfully sold his health-driven, seasonal True Food Kitchen, that he founded with Dr. Andrew Weil, to Centerbridge Partners. In 2019, he announced the sale of his restaurant group, Fox Restaurant Concepts (FRC) to The Cheesecake Factory. As the Founder of FRC, Fox remains responsible for its day-to-day operations, forming a one-of-a-kind partnership never before seen in the restaurant industry.

The Global Ambassador is located within RED Development's mixed-use development on the northwest corner of 44th Street and Camelback Road in Phoenix. The opening is slated for Fall 2023.

For more about The Global Ambassador, visit GlobalAmbassadorHotel.com.

About Author & Edit Hospitality
Author & Edit is the creation of restaurant innovator Sam Fox, who has developed a growing lineup of unique concepts found across the United States. Now, Fox embarks on a journey to design, develop and operate memorable hospitality experiences. The properties are authored with an extraordinary vision and meticulously edited to create offerings that are not only seen, but felt. What sets the company apart is not just in material, but in the culinary expertise, passion for local authenticity and subtle nuances that make up its collective story. Each Author & Edit property is an original; created through a global lens and connected to the diverse communities, cities and neighborhoods in which they reside. The company’s growing collection includes The Global Ambassador, an iconic hotel in the heart of Arcadia, where Phoenix, Scottsdale and Paradise Valley converge, as well as the remarkable The Twelve Thirty Club at 5th and Broadway in Nashville.