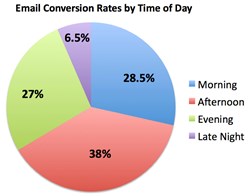 Retention Science, a leader and innovator in retention marketing, releases new research today that identifies the types of promotional offers that work best – and when they should be sent – to generate maximum revenue for online retailers. The data was derived from an analysis of 100 million online transactions, 20 million user profiles and 100 email campaigns.

Retention Science found that while consumers shop online in the afternoon and evening (65 percent) most promotional emails are sent first thing in the morning, hitting consumers when they aren’t in the buying mood. What’s more, although there is some variation by industry, the data showed that promotional offers sent on Tuesdays and Fridays perform best (28 and 26 percent conversion, respectively). Saturday was the lowest-performing day of the week with just 3 percent conversion rates, followed by Sunday with 6 percent.

SwayChic, a women’s fashion retailer with six physical stores located on the West Coast and a robust online presence, recently experienced the benefits of modifying its email campaign timing. Since the retailer switched to Tuesday evening promotional emails three months ago, it has seen revenues increase by 300 percent.

"Online retailers are hungry for insights into when, how and where their customers are buying, particularly as we enter the holiday season," said Chris Gore, data scientist of Retention Science. "By leveraging big data we are able to help them deliver the right offers at the right times, thus enabling our customers to not only acquire new customers but more importantly, retain existing ones."

"Based on guidance from Retention Science, we began offering our customers individually tailored offers based on their preferences," said Jack Lin, owner of BikeBerry, one of the largest online stores for bikes and accessory kits. "Since we made this change, we have seen a 200 percent increase in conversion, which has translated into a 133 percent increase in existing customer spending. After working with Retention Science for one year, existing customer spending now contributes twice as much to my total revenue."

Retention Science found conversions resulting from subscription email newsletters predominantly occur during the first 14 days of the subscription period (89 percent). The first and third days of subscription deliver the highest rates, with 23 percent and 11 percent, respectively.

Retention Science is a leader and innovator in retention marketing. Using big data analytics and predictive algorithms, its retention automation platform helps online retailers re-engage customers by profiling their behavior and creating timely and relevant retention campaigns for each individual, resulting in increased lifetime value. Clients such as CafePress, The Honest Company and Chrome Industries leverage the platform to personalize their retention campaigns and increase customer spending by up to 133 percent. Retention Science has been recognized by Fast Company as an Innovation Agent and by Ernst & Young for Entrepreneur of the Year. The company is based in Santa Monica, Calif., and backed by industry-leading investors such as Baroda Ventures, Forerunner Ventures and Mohr Davidow Ventures. For more information, visit http://www.retentionscience.com.