Swan Creek Retirement Village's Health Care Center is recognized, for a fifth time, as one of the nation's best. 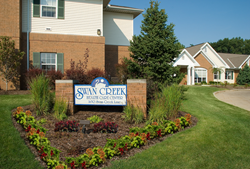 Swan Creek Health Care Center is honored as one of the nation's best for the fifth time.

This distinction, which we have received for the last five years, reaffirms the dedication to excellence from our entire team.

Swan Creek Retirement Village again is recognized as one of the nation's best in "U.S. News & World Report's" Best Nursing Homes of 2014.

"U.S. News" ranked more than 16,000 nursing homes for the study; only 21 percent of Ohio's homes received the same five-star rating as the Health Care Center.

"This distinction, which we have received for the last five years, reaffirms the dedication to excellence from our entire team. We are committed to carrying out the mission of the organization on a daily basis, making a difference for each resident we serve," Executive Director Ann Roller says.

Swan Creek recently renovated its Memory Enhancement Center. The overall design of the space is cohesive and calming with soft patterns that add interest and layers for the feeling of home. Several interactive stations stimulate physical, social and mental well-being through music, games and gardening.