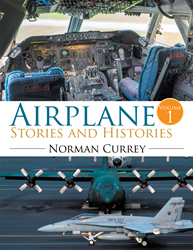 “An interesting book for all those who love flying . . . From then to now, the rapid progression in the development of aircraft carries and scientific advancements is incredible and the book will make readers aware of the new century of aviation."

Author and retired aeronautical engineer Norman Currey’s expertise and passion for flying have taken him all over the world, from England and Canada to the United States and South Korea. In “Airplane Stories and Histories: Volume 1,” he makes his extensive knowledge widely available for those interested in learning more about aviation history.

Spanning 200 years of aviation highlights, “Airplane Stories and Histories” provides a concise history of significant events in aeronautics—the first transatlantic flight, the invention of the jet engine and the development of modern unmanned aircraft—supplemented with photographs, sketches and diagrams. Additionally, Currey touches on the various pioneers who made significant strides in the aeronautical arena, including Sir George Cayley, the Wright Brothers, Charles Lindbergh, Wiley Post and Amelia Earhart.

Currey, who also penned the widely known “Aircraft Landing Gear Design: Principles and Practices,” was inspired to make aviation history more easily accessible and digestible to readers fascinated by the topic. He also wanted to show how rapidly airplanes have progressed over a short amount of time and pay tribute to the talented individuals who have made such advancements possible.

“’Airplane Stories and Histories: Volume 1’ is a well-written, concise history of modern aviation for the general public or the specialist,” wrote Jason Lulos, Pacific Book Review. “This would make a great gift to aviation lovers, engineers, scientists, and historians.”

“An interesting book for all those who love flying . . . From then to now, the rapid progression in the development of aircraft carries and scientific advancements is incredible and the book will make readers aware of the new century of aviation,” wrote Mamta Madhaven, Reader’s Favorite.

About the author
Norman Currey was born in Yorkshire, England. He served in the Air Training Corps from 1941 to 1943, then attended the de Havilland Aeronautical Technical School at Harfield and graduated as an aeronautical engineer in 1948. After graduating, he worked as a stress engineer at de Havilland on the Comet, then sailed to Canada where he was a design engineer at Avro Aircraft for 10 years, working mostly in the Initial Projects Office. He then worked at the Lockheed Corporation for 30 years conducting research and development in their Preliminary Design department and contributing to the development of the C-130, C-5, JetStar and conducting research and development in their Preliminary Design department. Since retirement, he has done consulting and presented lectures to the South Korean Agency Defense Development. He is a Chartered Engineer (UK) and a Fellow of the Royal Aeronautical Society, and has published many articles, presented papers at two SAE Systems Conferences and has written three books, including “Airplane Stories and Histories: Volume 1” and “Airplane Stories and Histories: Volume 2.”