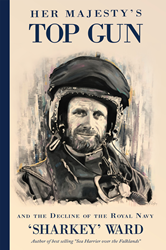 Ward is among a very proud few who can say that he was ever Her Majesty’s Leading Top Gun. He shares his experiences to inspire young people to serve in the Royal Navy and to restore the public’s faith in the institution. Ward claims that the Naval Service’s reputation has suffered in the U.K. as the result of negative propaganda and he seeks to set the record straight.

A Royal Navy Top Gun and Air Warfare Instructor, Sharkey Ward was Senior Pilot of 892 Phantom F4-K Squadron in the aircraft carrier HMS Ark Royal during the Cold War. He flew over sixty war missions by day and night, achieved three air-to-air kills (& one damaged) and was involved in or witnessed eight further kills. During the war he was awarded the Air Force Cross for services to Harrier Aviation and then decorated with the Distinguished Service Cross for gallantry in the Falklands.

Mill City Press, a division of Salem Media Group, is a leader in the general market division of self-publishing. Her Majesty’s Top Gun and the Decline of the Royal Navy is available online through amazon.com and barnesandnoble.com.