New findings released today confirm that poverty and inequity uniquely harm women and gender minorities. “The Gender Disadvantage: Why Inequity Persists” report argues that improving the well-being of women—particularly women of color—would deliver the greatest impact in the fight to reduce poverty and boost Illinois’ economy. 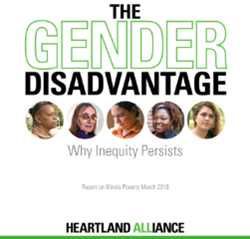 “Women are excelling in the educational realm, are represented at historic rates in Congress and Chicago is on the cusp of electing its first black woman mayor. But, against that backdrop of progress, gender disparities persist.”

This latest study from Heartland Alliance’s Social IMPACT Research Center shows how gender, gender identity, and gender norms deepen poverty for women and gender minorities in Illinois—and how women who have other marginalized identities experience even more inequity.

“The Gender Disadvantage” demonstrated that, on many measures of economic opportunity, women fare worse than men. Women in Illinois earn only 78 cents for every dollar earned by men for full-time, year-round work, and this pay gap gets wider for women of color. If we continue to do nothing, women in Illinois will not see equal pay until 2065. But if we do only one thing—eliminate the gender wage gap—working women’s poverty rates in Illinois would be more than halved. That would translate into a 16 percent increase in women’s earnings, totaling $20.5 billion—a huge potential boost for Illinois’s economy that would benefit 1.1 million children by reducing the poverty rate for children with working mothers by 43 percent.

“Women are a driving force in our society and economy, and yet they continue to experience inequitable outcomes in the workplace, at home, and in their health and well-being. These inequities are amplified for women who face oppression based on other aspects of their identity,” says Evelyn Diaz, President of Heartland Alliance. “In order to address the gender poverty and wealth gap, our solutions must also tackle inequities for people of color, immigrants, low-wage workers, LGBTQ people, and others.”

“This Women’s History Month, it’s important to celebrate the progress towards gender equity—women are excelling in the educational realm, are represented at historic rates in Congress, and Chicago is on the cusp of electing its first black woman mayor,” said Katie Buitrago, Director of Research at Heartland Alliance. “But, against that backdrop of progress, stark gender disparities persist. Women and gender minorities still fare worse than men on almost every indicator of well-being.”

In order to combat these disparities, “The Gender Disadvantage” calls for sweeping policy change, including:

“The Gender Disadvantage” and related infographics are available for download at http://www.heartlandalliance.org/povertyreport. All data images are to be credited to the Heartland Alliance Social IMPACT Research Center. Contact IMPACT for assistance accessing and interpreting local data.