The First of Four New ‘Anatomy’ Specials, Centered Around Black Excellence, Is Coming to REVOLT TV in February 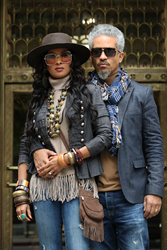 The goal of the Anatomy series is not only to entertain, but to elevate and inspire REVOLT’s global audience. - Jennia Fredrique Aponte

REVOLT TV announced its plans to renew its deal with Full Frequency Media to create four new installments of its popular “Anatomy of…” docu-series, with the first new special premiering in February 2020.

The “Anatomy of…” series premiered its first two installments earlier this year with “Anatomy of a Queen” in March (in honor of Women’s History Month) and “Anatomy of a King: The Art of Fatherhood” which premiered on Father’s Day in June. Following the success of these powerful projects, REVOLT TV renewed its deal with husband & wife production duo Sol & Jennia Fredrique Aponte of Full Frequency Media, to extend the concept into a docu-series in 2020. The program seeks to tell intimate and uplifting stories of women and men exemplifying Black Excellence in varying forms across business, fashion, art, family, love and more.

“REVOLT boldly represents youth culture from an elevated, authentic, and unapologetic Hip Hop lens, giving a platform to creatives to push the boundary of the culture, inspiring excellence, and empowering our community to change the world,” said Robyn Lattaker-Johnson, Head of Content for REVOLT. “The Anatomy of… series of specials does just that by highlighting influential culture movers and shakers who epitomize innovation and excellence.”

The third installment of the “Anatomy” series, and first of the new 2020 run, entitled “Anatomy of Black Love” is slated to premiere on Valentine’s Day and will feature power couples Michael Jai White and Gillian White, Eric Bellinger and La'Myia Good-Bellinger, Sol Aponte and Jennia Fredrique Aponte and more. In the signature “Anatomy of…” style, the program will feature highly stylized images alongside intimate interviews, as the couples speak candidly about subjects in the culture that are rarely discussed or explored authentically on-screen.

“The goal of the Anatomy series is not only to entertain, but to elevate and inspire REVOLT’s global audience,” says director Jennia Fredrique Aponte.

The premiere will be accompanied by a viral digital and social media campaign designed to inspire the Black community to celebrate, appreciate, and honor Black love.