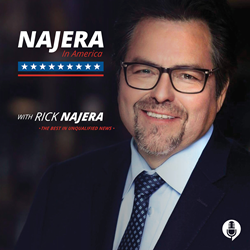 “Storytelling is at the core of reVolver Podcasts entertainment lineup. I am excited to have Rick and his show bringing important subjects such as diversity, entertainment, and politics to our unique digital platform.”

Najera explained that NIA, created at the height of the COVID-19 pandemic, came from his desire to give people hope during a very difficult time. As the creator of “Latino Thought Makers,” his current live show of more than six years, Najera was already trying to bring diversity to the forefront. With his new podcast, he wants his audiences to know that people, around the country, are all in this together.

Najera explained: “I think nowadays, people are waking up and saying: ‘My God how can it get worse?’ Well, in this show I get to tell you in a comedic way.”

A consummate industry professional and a Los Angeles native, Najera worked his way up from Shakespeare at the Old Globe Repertory Theater to writing for major television comedies such as “In Living Color,” “Robert Townsend,” “MADtv” to dramatic shows, such as “East Los High” for Hulu. He developed his self-written stage play: “Latinologues”, which was taken to Broadway at the Helen Hayes Theatre in New York. Najera is considered among the top sketch comedy writers and speakers in Hollywood. He also starred in two Showtime specials, “Diary of a Dad Man” and “Legally Brown.” Currently, he is also working on his fifth book with Dr. Sanjiv Chopra, based on writing and speaking.

“Najera in America” is produced by reVolver Podcasts and Cohesive Entertainment Group, LLC and is available on Apple Podcasts, Google Play, iHeart, Spotify and can be found here: https://www.revolverpodcasts.com/shows/najera-in-america/

Find and subscribe to the "Najera in America" podcast on social media at @najerainamerica and hashtag #NIA and #NajeraInAmerica.