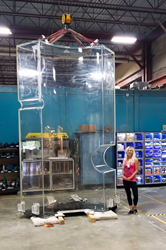 Our team has been working diligently with the LZ team over the last two years on everything from, measurements, casting and fabrication in order to make this the most sensitive dark matter detector ever created.

Reynolds Polymer Technology, the world's leader in fully integrated, highly engineered acrylic solutions, has been tasked with being the sole acrylic provider for the largest Dark Matter experiment in the U.S. called LUX-ZEPLIN (LZ). Since officially signing on in 2016, Reynolds has worked closely with an international team of approximately 250 scientists, engineers and technicians from 38 institutions. LZ, a project funded and managed by the U.S. Department of Energy’s Lawrence Berkley National Laboratory (Berkely Lab), is currently under construction in South Dakota and will soon be officially underway with next steps being to fill the 12-foot-tall and 1-inch thick clear veto tanks with a liquid that produces minute flashes of light.

“We’re incredibly honored to be a part of this highly-advanced scientific experiment,” said Rodney Olson, CEO of Reynolds Polymer Technology. “Our team has been working diligently with the LZ team over the last two years on everything from, measurements, casting and fabrication in order to make this the most sensitive dark matter detector ever created."

Positioned as one of the last, great unanswered questions of physics, this potential Nobel Prize-winning project has the ability to prove what 85 percent of the universe is made up of. This massive undertaking is among some of the most difficult to execute in the acrylic industry further demonstrating and solidifying Reynolds’ fabrication and bonding capabilities. The Reynolds’ team, utilized a unique methodology to cast the Ultraviolet Transmitting Acrylic sheets compliant with LZ’s stringent needs allowing UV rays to pass through the acrylic thickness. LZ is designed to be approximately 100 times more sensitive than its predecessor LUX partially as a result of the one-of-a-kind acrylic. The experiment calls for 10 vessels in various sizes with the four largest veto tanks measuring 12.3 feet tall, 7.5 feet wide and 3.4 feet thick, and weigh 1,500 pounds each.

The custom-designed tanks are being strategically placed one mile below the earth’s surface at the Sanford Underground Research Facility (SURF). The empty vessels will remain in protective wrapping until the final stages of installation take place in late 2019. The highly-anticipated experiment is set to begin taking data in 2020 over a 5-year span.

“Reynolds Polymer Technology has a sterling reputation amongst the particle physics community; their successful completion of a number of first-rate projects, including the Nobel-Prize winning Sudbury Neutrino Observatory and the Daya Bay neutrino experiment, made them the obvious choice for the LZ experiment to provide not only impeccable acrylic tanks but excellent customer service and a thorough understanding of the unusual needs of the project,” said Dr. Sally Shaw.