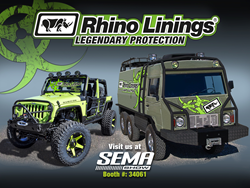 All of our featured vehicles at the 2016 SEMA Show effectively demonstrate various Rhino Linings product applications, far beyond the traditional truck bed liner that started it all.

Rhino Linings Corporation (http://www.rhinolinings.com) is poised to unveil two wild, off-road vehicles that are sure to turn heads at this year’s SEMA® show in Las Vegas, Nov. 1-4, 2016. Both vehicles, flaunting Rhino Linings legendary protective coatings, will be featured in the Rhino Linings booth #34061 in the Las Vegas Convention Center’s South Hall.

The other vehicle featured in the Rhino Linings booth will be a larger-than-life, 6-wheel Pinzgauer 712 Austrian military vehicle. This custom-built tank is armored by internal and external steel tube roll cages and entirely coated inside and out with Rhino Linings protective coating in an olive drab green custom color for the ultimate, indestructible protection. A 5-point harness system and seating for ten ensures the safety of passengers when the end times are here. To top it off, the Pinzgauer comes fully equipped with a DJ booth, XM Satellite Radio, and amplifier with stadium speakers that fold out of the roof (because entertainment could become scarce at world’s end).

"We’re thrilled to unveil our disaster-proof vehicles at SEMA this year," stated Elaine Luttrell, vice president of sales operations and marketing at Rhino Linings Corporation. "All of our featured vehicles at the 2016 SEMA Show effectively demonstrate various Rhino Linings product applications, far beyond the traditional truck bed liner that started it all."

In addition to the two vehicles featured in the Rhino Linings booth #34061, the company’s other vehicle collaborations will make appearances throughout the SEMA show hall, including an extensive collection of Ford, Chevrolet, GMC, Toyota and Ram truck builds.