Richard Lippard's new book “The Abductors Book 2 Justice Serve" details how once he was fully recovered from his gunshot wounds, John heads for Miami in hopes of finding the killers of his wife and friends. There, he meets up with an unlikely partner, and the two of them track down the killers. 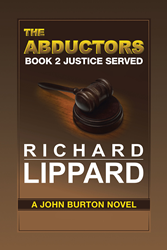 Richard Lippard, the author of this first book in the series of John Burton novels, has completed his new book “The Abductors Book 2 Justice Serve": an intriguing work that explores how while bent on revenge, John plans the assassination of each member of the pirate crew.

Lippard writes, "The going was slow, and he had to surface numerous times for air. Each time he came to the surface, he checked the two boats, the Dram Bouie, his boat, and the Maria Elena, the boat belonging to the killers of his wife and his friends. It didn’t appear that he was making much progress distancing himself from them, but he kept on going. His body was weak and getting weaker, but he pushed on. When he was what he thought to be two hundred yards from the boats, he rolled onto his back and started kicking quietly as he put more distance between them."

Published by Page Publishing, Richard Lippard's riveting work has exciting twists and turns on every page.

After meeting Miranda in Miami, John has a change of heart. He contacts FBI Agent Sally Martin
with a plan so outrageous that it reaches the president of the United States. With the president’s
approval, the FBI, the DEA, and John can issue a crippling blow to the illicit drug traffic along the entire eastern seaboard of the United States. In the process, John can even earn his freedom.

Readers who wish to experience this thrilling work can purchase “The Abductors Book 2 Justice Serve" at bookstores everywhere, or online at the Apple iTunes Store, Amazon, Google Play, or Barnes and Noble.

Page Publishing is a traditional, full-service publishing house that handles all the intricacies involved
in publishing its authors’ books, including distribution in the world’s largest retail outlets and royalty
generation. Page Publishing knows that authors need to be free to create, not mired in logistics like
eBook conversion, establishing wholesale accounts, insurance, shipping, taxes, and so on. Page’s
accomplished writers and publishing professionals allow authors to leave behind these complex and
time-consuming issues and focus on their passion: writing and creating.