Richard R. Wier, Jr.’s new book “They Had to Die that Night: The Inside Story of the Investigation and Trial of Herbert F. Steigler” is a thrilling work of true crime

Recent release “They Had to Die that Night: The Inside Story of the Investigation and Trial of Herbert F. Steigler” from Page Publishing author Richard R. Wier, Jr. is a spine-tingling non-fiction book that goes on a deep dive into a murderer’s mind. 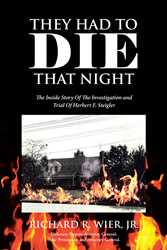 Richard R. Wier, Jr., a lifelong resident of Delaware and a state prosecutor then attorney general, has completed his new book “They Had to Die that Night: The Inside Story of the Investigation and Trial of Herbert F. Steigler”: a gripping and potent true story that explores the mind of a psychopathic murderer.

This book discusses the motives and reasons behind a murderer’s wrongdoings that makes for a hard-to-put-down read for true-crime fans. It causes a flurry of emotions as the story unfolds, starting off with the description of the tragic fire that caused multiple deaths. The author details the investigation that occurred, while he was a young deputy attorney general in Delaware. This true-crime novel is full of crime, murder, drama, adultery, misappropriation of funds, lie detector tests, unethical business practices, and commercial crimes. Readers will find out if justice was served for the innocent victims of a psychopathic murderer, who is the centerpiece of this engrossing true story.

Readers who wish to experience this chilling work can purchase “They Had to Die that Night: The Inside Story of the Investigation and Trial of Herbert F. Steigler” at bookstores everywhere, or online at the Apple iTunes Store, Amazon, Google Play, or Barnes and Noble.