New Review from VVA Magazine Praises ‘Cologne No. 10 for Men’ by Richard Morris

‘There aren’t very many funny Vietnam War infantry books. This is one of them. Read it and be amazed.’ —VVA 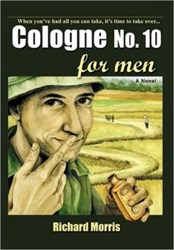 This is truly a superb novel of the Vietnam War, a novel that compares favorably with those earlier ‘dark humor’ war novels such as ‘CATCH-22’ and ‘M.A.S.H.’ The writing crackles with authenticity.

Critics have praised Richard Morris’ novel “Cologne No. 10 For Men.” Writer’s Digest said, “This is truly a superb novel of the Vietnam War, a novel that compares favorably with those earlier ‘dark humor’ war novels such as ‘CATCH-22’ and ‘M.A.S.H.’ The writing crackles with authenticity.” Kirkus Reviews called it “a funny and serviceable satire about the gross rationalizations that propel war and peace.” A new review by The Vietnam Veterans of America online magazine is giving the 2007 novel new life.

“Richard Morris was a rifle platoon leader with the First Cavalry Division in Vietnam in 1967. His main character in his 2007 novel Cologne No. 10 for Men,’ Lt. Wilfred Carmenghetti, is a platoon leader of a company in the First Cav in Vietnam. I suspect that the author drew on his experiences in Vietnam to write this satirical novel, as the details are all keenly observed and perfectly represented.

“[The novel] could not have been written without the model that Joseph Heller provided [in ‘Catch-22’] with his World War II main character, Yossarian, who was convinced that somebody was trying to kill him. Somebody is trying to kill Lt. Carmenghetti, too—a sniper who can’t shoot straight because of his long finger nails.

“Many of the subjects usually found in Vietnam War infantry novels are here: winning hearts and minds; hippies demonstrating back home for peace; enlisting in the Army to avoid the draft; saving the world from godless communism; 90 percent of the troops being in the rear with the beer; the bloodthirsty news media; search and clear; and—of course—body counts. The good news is that Morris uses all of these oft-mentioned subjects to satirical effect and they seem fresh and new most of the time.

“[In the end,] Carmenghetti figures out a way to end all killing in Vietnam, and it involves body counts.”

About the Author
For many years, Richard Morris wrote books, articles and speeches for a trade association. He started writing “Cologne No. 10 for Men” more than 25 years before finishing it in 2006. He also wrote a song series in Vietnam (see Skytroopers at http://www.cdbaby.com/cd/richardmorris) and recorded it in 2007.