“From the Shadows into the Sunlight: Making Racial Discrimination Irrelevant” from Christian Faith Publishing author Rick Kelly is an important volume that critiques racial discrimination in America, and how the government remains apathetic toward the treatment of people of color in a country that equips them to fail their American dream. 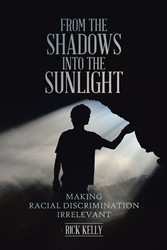 Kelly shares, “All Americans should welcome the opportunity to move forward into a better future for America and for all Americans while mending ancient wounds from the nations original sin and at the same time seek to remediate the lingering ills and inflicted hardships still present to this day that divides the nation’s people such that some Americans still feel relegated to second class citizenship. Courageous people of all faiths, of goodwill, and of conscience can impart heartfelt support for a new emancipation that moves toward freeing both black and white Americans from the racial disharmony and acrimony that surrounds the issue of racial discrimination in America. It is now possible to seek a new direction that promotes self-reliance and economic progress from within the black community by redirecting black earned resources through black individuals not through the endless, ineffective government programs and bureaucracies. It has been more than half a century since the Civil Rights Act of 1964 outlawed the racial discrimination and segregation that persists to this day, and the government has clearly failed to abate such daily pathologies. Government poverty and affirmative action programs have not reduced the racial wealth gap that remains virtually unchanged since 1964. The black middle class suffers from consistently higher unemployment rates while also being burdened with increasing high student loan debt and home mortgage debt that reduces the opportunity for home ownership and family net worth growth. President John F. Kennedy in a 1961 speech repeated the time-worn saying that the only thing necessary for the triumph of evil is that good men do nothing. This book suggests a new direction of self-reliance and hope with a new emancipation proclaimed for all Americans, if only there is finally the will to put the nation’s dark past behind us and move out of the shadows and into the sunlight of a just and moral new future.”

Published by Christian Faith Publishing, Rick Kelly’s new book talks about the injustices experienced by persons of color in modern-day America. In this insightful work, the author shines as a voice against racial discrimination in modern America.

View a synopsis of “From the Shadows into the Sunlight: Making Racial Discrimination Irrelevant” on YouTube.

Consumers can purchase“From the Shadows into the Sunlight: Making Racial Discrimination Irrelevant” at traditional brick & mortar bookstores, or online at Amazon.com, Apple iTunes store, or Barnes and Noble.

For additional information or inquiries about “From the Shadows into the Sunlight: Making Racial Discrimination Irrelevant,” contact the Christian Faith Publishing media department at 866-554-0919.