“Twenty Six Years an Addict: 1985 - 2011” from Christian Faith Publishing author Ricky Cooks is a thought-provoking collection of poems that share the author’s moments of self-abuse and his repentance from sin with God’s aid. 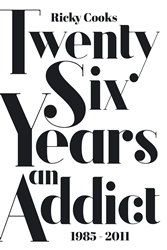 Cooks shares, “If you had met me or had any type of relationship with me in the years from 1985 to 2011, you really never knew me. You only encountered a façade covering the residue of what I used to be and were witness to the onset of my withdrawal from reality. My life goals and accomplishments were becoming meaningless. They were dissipating into a cloud of smoke coming from the end of a pipe that was never satisfied as it consumed my life.

“After recognizing my plight and realizing the finality of the dilemma I was in, I cried out to Jesus. About one month later (January 1, 2012, 12:30 a.m.), my eyes were opened. I was led away from darkness to light. I changed from a fornicating crack smoker (I had incorporated drug use and sex into a single act) to a celibate and sober man with a hunger for the truth. On that same day (January 1, 2012, 1:30 p.m.), I entered into Mama Delta’s Love House.

“I have thrown away years of my life and I would like to help others from making and/or maintaining the same mistakes by sharing my feelings, situations, confrontations, and resolutions. I pray that I can make a positive impact on those who have become entangled in one or more of Satan’s devices that are designed to draw us away from the divine light of God into eternal darkness. He who created us without our help will not save us without our consent.”

Published by Christian Faith Publishing, Ricky Cooks’s new book imparts powerful poems that magnify the unconditional love of God that beckons the sinful and lost into His saving grace and repose.

This book will surely warm the hearts of readers as they partake in poetry inspired by a life of victory from torment.

Consumers can purchase “Twenty Six Years an Addict: 1985 - 2011” at traditional brick-and-mortar bookstores or online at Amazon.com, Apple iTunes store, or Barnes and Noble.

For additional information or inquiries about “Twenty Six Years an Addict: 1985 - 2011,” contact the Christian Faith Publishing media department at 866-554-0919.