Rigaku is exhibiting at The 71st Southeastern Regional Meeting of the American Chemical Society presenting its benchtop X-ray analytical instrumentation. 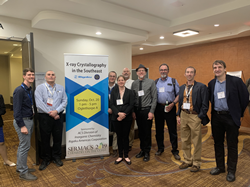 Rigaku, a key sponsor of the event, is presenting its lines of benchtop X-ray analytical instrumentation at Booth 13.

Rigaku, a key sponsor of the event, is presenting its lines of benchtop X-ray analytical instrumentation at Booth 13.

On the opening day of the event, a presentation on single crystal X-ray diffraction technology was given entitled, “The Rigaku Oxford Diffraction XtaLAB Synergy: from powder analysis to electron density study and protein structure solution.” The session highlighted the performance of the Rigaku XtaLAB Synergy-S X-ray diffractometer.

More information about single crystal X-ray diffractometers from Rigaku is available at http://www.rigaku.com/products/smc.

About Rigaku
Since its inception in Japan in 1951, Rigaku has been at the forefront of analytical and industrial instrumentation technology. Rigaku and its subsidiaries form a global group focused on general-purpose analytical instrumentation and the life sciences. With hundreds of major innovations to their credit, Rigaku companies are world leaders in X-ray spectrometry, diffraction, and optics, as well as small molecule and protein crystallography and semiconductor metrology. Today, Rigaku employs over 1,400 people in the manufacturing and support of its analytical equipment, which is used in more than 90 countries around the world supporting research, development, and quality assurance activities. Throughout the world, Rigaku continuously promotes partnerships, dialog, and innovation within the global scientific and industrial communities.