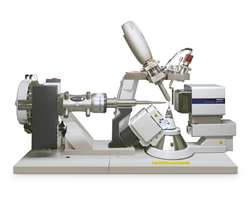 The XtaLAB Synergy-DW VHF design is an extension of a revolutionary idea introduced in 2004 with the Oxford Diffraction Gemini diffractometer, with two independent X-ray sources.

The XtaLAB Synergy-DW VHF design is an extension of a revolutionary idea introduced in 2004 with the Oxford Diffraction Gemini diffractometer, with two independent X-ray sources. The groundbreaking design enabled crystallographers to easily switch between copper (Cu) and molybdenum (Mo) wavelengths, greatly expanding the experimental flexibility available for analyzing single crystal samples. The new system retains the flexibility of the dual-wavelength capability but also adds the exceptional flux enhancement of a reliable, rotating anode X-ray source.

The XtaLAB Synergy-DW VHF diffractometer provides 50% more flux at the sample position over the previous DW model due to newly designed confocal optics. The ability to configure it with two different wavelengths means that with a Cu/Mo anode the XtaLAB Synergy-DW VHF instrument can be shared between structural biology and chemical crystallography groups. The system is positioned to be a no-compromise solution, to allow the sharing of resources when needed, for both protein and small molecule crystallographers.

More information about single crystal diffraction solutions from Rigaku is available at http://www.rigaku.com/smc.