Rigaku is in attendance at Pittcon 2020 in Chicago, IL - exhibiting its X-ray and handheld analytical instrumentation at booth 4725 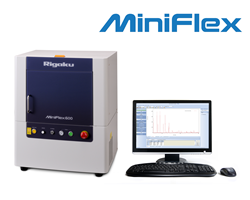 Rigaku Corporation is pleased to announce its attendance at the 71st annual Pittsburgh Conference on Analytical Chemistry and Applied Spectroscopy (Pittcon 2020), being held March 1 - 5, at McCormick Place in Chicago, Illinois. Pittcon is the world’s leading annual conference and exposition on laboratory science, attracting attendees from industry, academia and government from over 90 countries worldwide. Rigaku is exhibiting its benchtop lines of X-ray diffraction (XRD), X-ray fluorescence (XRF), as well as handheld Raman and laser induced breakdown spectroscopy (LIBS) instrumentation at Booth # 4725.

The Supermini200 analyzer is the world's only high-power (200 W) benchtop sequential wavelength dispersive X-ray fluorescence spectrometer for elemental analysis of oxygen (O) through uranium (U) of almost any material. It uniquely delivers low cost-of-ownership with high resolution and lower limits of detection (LLD).

The Rigaku NEX DE series of high-performance, direct excitation EDXRF elemental analyzers is also featured. On display is the Rigaku NEX DE VS direct excitation variable spot X-ray fluorescence elemental analyzer. The NEX DE VS system is uniquely suited for small spot analysis. It features a high-resolution camera combined with automated collimators allowing for precise positioning of a sample for the analysis of 1 mm, 3 mm, and 10 mm spot sizes.

RAD will also present a talk entitled, “Library and Method Development – what Lies Behind the Black Box?” hosted by Dr. Suzanne Schreyer, Sr. Applications Scientist on March 3 from 3:35 – 4:10pm in Room 181B.

About Rigaku
Since its inception in Japan in 1951, Rigaku has been at the forefront of analytical and industrial instrumentation technology. Rigaku and its subsidiaries form a global group focused on general-purpose analytical instrumentation and the life sciences. With hundreds of major innovations to their credit, Rigaku companies are world leaders in X-ray spectrometry, diffraction, and optics, as well as small molecule and protein crystallography and semiconductor metrology. Today, Rigaku employs over 1,400 people in the manufacturing and support of its analytical equipment, which is used in more than 90 countries around the world supporting research, development, and quality assurance activities. Throughout the world, Rigaku continuously promotes partnerships, dialog, and innovation within the global scientific and industrial communities.