Greg Adler collected his second trophy of the year as he brought his Team 4 Wheel Parts Pro 4 to a third place result this past weekend at the Lucas Oil Off Road Racing Series SoCal Shootout in Lake Elsinore, California. Adler’s podium finish on Sunday capped off a week that Adler described as “one of the most rewarding of my life.” 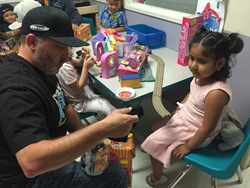 I left there feeling inspired by their strength and spirit and could not help but to think about my own children, and how fortunate I truly am.

Greg Adler collected his second trophy of the year as he brought his Team 4 Wheel Parts Pro 4 to a third place result this past weekend at the Lucas Oil Off Road Racing Series SoCal Shootout in Lake Elsinore, California. Adler’s podium finish on Sunday capped off a week that Adler described as “one of the most rewarding of my life.”

Leading up to the event, Adler was invited to join Lucas Oil executives and a contingent of Series drivers to visit the Loma Linda Children’s hospital alongside the Jessie Rees Foundation during one of the foundation’s many hospital visits they perform throughout the year. “The Jessie Rees Foundation was created in honor of a young girl, Jessie Rees, who wanted to put smiles on the faces of children fighting cancer,” said Adler. “Jessie herself was battling the disease when she decided to create little ‘Joy Jars’ containing toys for kids of all ages."

"I was honored to be invited to spend some time with these strong and courageous children. In meeting these kids from 5 months to 18 years old, I was completely blown away by the great attitudes of these kids. Despite their treatments, these kids were smiling and very happy to receive the Joy Jars along with the toy trucks and Barbies we gave them. We shared with them Jessie’s motto of Never Ever Give Up (NEGU) which is so uplifting for these children. I left there feeling inspired by their strength and spirit and could not help but to think about my own children, and how fortunate I truly am.”

The following day, during the Series’ event kick-off Press Conference, Adler had the opportunity to speak of the experience with the assembled media while also sharing the message behind the team’s special Autism Awareness livery that would be featured on his Pro 4 throughout the weekend.

April is Autism Awareness Month,” said Adler. “Due to our being made aware that our son is on the Autism spectrum, my wife, Stacy and I were able to begin early treatment and training to assist him in overcoming many of the challenges related to Autism. We were fortunate to have been made aware by our Doctor and with racing, along with the media exposure it receives, we are able to promote the importance of Autism awareness this weekend.”

On Saturday, Adler hit the dirt for Round 3 on the mile long short course track at Lake Elsinore Motorsports Park. Starting on the front row, he battled through the ensuing slugfest at the front of the pack as he raced among the sport’s elite. With five laps completed, the seemingly inevitable reality of contact with another vehicle resulted in a cut tire, forcing Adler into the pits for a tire change during a caution period.

Back on track and mounting his attack, Adler worked his way through the field and into the top 5 for the next handful of laps when once again the caution flag flew, bringing the field back together for a restart. This time, Adler got caught in the melee resulting in irreparable suspension damage ending his day. “Everyone’s fighting for position out there,” he said. “We were keeping it clean but sometimes trouble finds you and unfortunately, today we got bit and ended our day early.”

After a night of repairs the crew had the #10 ready for Sunday’s conclusion to the weekend doubleheader. Again, Adler combined a solid qualifying effort with a favorable draw and took the green flag at the front of the pack. Although the drag race to the first corner put him into the second spot, he ran a quick pace and held off the attacking challengers. While he stayed clear of the donnybrook in his wake, Adler continued to chase the leader until a late race incident regrouped the field for a final restart. The race to the finish saw Adler dicing for the final two podium places until ultimately he came home in third, his second such finish in just four rounds of racing.

“A lot of our friends, family and 4 Wheel Parts employees were out there supporting us and it’s great to be able to represent them on the podium,” said Adler. “The truck was just hooked up and we were where we needed to be to battle with these guys at the front. We are making great headway with the new truck and we’re going to keep on making progress as we head deeper into the season.”

Currently fourth place in the season’s standings, Adler and Team 4 Wheel Parts now head to Tooele, Utah for Rounds 5 & 6 at the beautiful Utah Motorsports Campus just outside of Salt Lake City on May 21-22. If you can’t be there to see it live, you can catch the Lucas Oil Off Road Racing Series live on lucasoilracing.tv. The series will also be broadcast throughout the season on CBS, the CBS Sports Network and MAVTV.

About 4 Wheel Parts:
4 Wheel Parts is the global leader in off-road truck, Jeep and aftermarket performance products. With 74 locations across the U.S. and Canada and growing, 4 Wheel Parts Service Centers install all the products they sell. Maintaining the nation’s largest inventory of off-road tires, Fuel wheels, lift kits, and Jeep accessories, 4 Wheel Parts serves customers across the country and around the globe. Life is Better Off-Road™. Visit them at 4wheelparts.com or call toll-free 877-474-4821