MOSS has already channeled US $10M in carbon credit transactions for projects in the Amazon. This deal will turn Flamengo into the largest carbon neutral football club in the world. 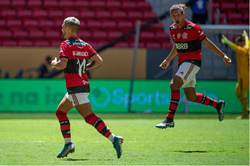 The football club with one of the largest fanbases in the world and the largest carbon credit platform globally have come together to help preserve the largest tropical forest on the planet. There is no lack of superlatives in the announcement of Flamengo's new sponsor: MOSS, a platform that allows for online carbon credit transactions and channels resources to projects for the preservation of the Amazon, is the new sponsor of the club for 2021.

MOSS has developed a platform that converts carbon credits into tokens (called MCO2), which trade at digital exchanges. Whoever buys these credits can resell them or use them for compensation of greenhouse gas emissions. In total, more than US $10M have been directed to projects such as saving the Fortaleza Ituxi, which occupies an area larger than that of the city of São Paulo, from forest fires and other deforestation. As part of the sponsorship, in addition to the resources, MOSS will advise Flamengo on how to offset the emissions of its football team and to become the largest carbon neutral club in the world.

“In Brazil, we have the largest tropical rain forest on the planet along with a pressing set of challenges to preserve it. One is to show people who want to help the Amazon that it is possible to do in a safe and practical way through the purchase of carbon credits. There is nothing better than this partnership with Flamengo and its huge fanbase to give visibility to this crucial issue and how to solve it”, says Luis Adaime, founder and CEO of MOSS.

“We are very optimistic about this partnership. In addition to the financial aspect, with the signing of an important contract in a period of pandemic like the one we are experiencing, we have Flamengo, once again, positioning itself in the social vanguard, as one of the first clubs in the world to commit to the of neutralization of carbon emissions. It is a partnership that will help publicize the work we are committed to for our planet,” noted Gustavo de Oliveira, Flamengo's Vice President of Communication and Marketing.

The sponsorship contract between MOSS and Flamengo lasts until December 2021 and involves an investment of R$3.5M/US$600k by MOSS. The company's brand will appear on the players' socks and on the official bus that transports the athletes, in addition to the official Flamengo social network channels.

About MOSS and the MCO2 Token
Moss is the largest environmental platform in the world. With global operations and headquartered in Brazil, it started operating in early 2020, when it launched the first carbon credit-backed token, MCO2, used to offset carbon footprints. MCO2 is audited by international institutions and registered with Verra, a foundation that regulates the global registration of voluntary credits, following a strict global protocol.