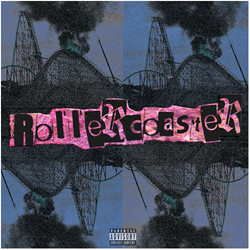 When listeners hear this song, I want them to feel empowered to confront uncomfortable issues and have the strength to stand up for themselves.

“Rollercoaster” is a lo-fi, jazz-pop track playing on the concept of “rollercoaster of emotions.”

Lyrically transporting listeners into a captivating love story with a twisted ending. Sonically, you won’t be able to help but move your feet.

“This is just one of those songs that came together perfectly,” Moody explains. “I’m super excited for this song to finally be released because it’s one of my favorite songs thus far. This was a song that just came to me, the first time I heard the beat the words just came out.”

Written by Moody Bank$, “Rollercoaster” begins with a sinister saxophone sample that gives the song an old-time feeling, while the drums and hook bring in a new modern pop sound that leaves a smooth balance of old and new.

Moody continues, “when listeners hear this song, I want them to feel empowered. Empowered by being able to confront uncomfortable issues and having the strength to stand up for yourself and move confidently.”

Produced by Mask and Noah Fendz, “Rollercoaster” is available on all major platforms. Follow Moody Bank$ on Instagram for more information on her songs and upcoming projects.

Moody Bank$ was born in Southern California. Since her youth, she has been involved in art, music, writing songs and poems, as well as designing clothes, and painting pictures. During school, Moody started playing basketball and went on to get a scholarship at a division two college, where she played and graduated. Once she finished college, she decided that she wanted a change. She soon relocated to Austin, the live music capital of the world to refine her live show and pursue her music career. Now Moody Bank$ is one of Austin’s most promising upcoming artists, and her music is available now on all streaming platforms.