Ontario-based pop group Girl Pow-R took the province by storm over the holiday season as they performed in three Santa Claus parades. 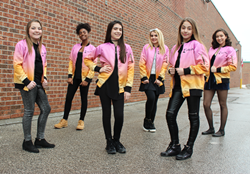 The rising pop supergroup participated in the Santa Claus parades in Niagara Falls, Toronto, and Vaughn.

Fans were able to get in the holiday spirit with Girl Pow-R as the group ended 2019 with a bang, performing in some of Ontario’s most festive events!

The rising pop supergroup participated in the Santa Claus parades in Niagara Falls, Toronto, and Vaughn. Girl Pow-R was part of an impressive line-up of acts during the festivities.

Girl Pow-R, which consists of girls ages 11 to 17, has had a whirlwind year. Recently, the group released a music video for the single “This Is Us,” which reflects the girls' passion and focus on social issues. Their involvement in social causes across the province is what drives their music, inspiring young girls and boys alike to make a difference within their communities.

Girl Pow-R launched on International Women’s Day in 2017. Since then, the group has supported causes such as education for girls, youth homelessness, and health advocacy. The pop group is represented by Canyon Entertainment Group, an Ontario-based artist management company.