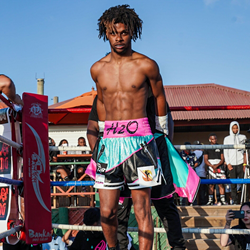 “I will be world champion in several weight classes.”

Undefeated prospect Ashton “H2O” Sylve aims to make a splash in his U.S. debut when he steps into the ring on Saturday, February 26 in Pomona, California, as the 17-year-old looks to leap into the discussion amongst the sport’s top prospects.

A self-described “mobile brawler” inside of the ring, Sylve first gained acclaim at eight-years-old, when his father and trainer Ivan posted a training video of Ashton that caught the attention of all-time great Floyd Mayweather. Next thing Sylve knew, he was invited into Mayweather’s gym and began learning from Mayweather and his uncles Roger and Jeff.

“My favorite fighter and the one I have always watched tapes on, is Floyd Mayweather,” said Sylve. “So to meet him and be invited to his gym to train and be a part of his experience, that opened my eyes to the dedication it takes to be a successful fighter. I’m training hard to do just that. I want to be a world champion in several weight classes for sure.”

Sylve put together a stellar amateur career across 110 fights that included 10 national titles, two International Boxing Cup victories and over 100 wins. At just 16-years-old, Sylve determined he had accomplished all he could in the amateur ranks and turned pro as a teenager.

Training out of the Jack Rabbit Gym in Long Beach, California, Sylve is well-known in the area and has sparred numerous top pros, including four-division world champion Leo Santa Cruz. Sylve, who is trained by his father, has piled up a 6-0 record with five knockouts since his debut in October 2020, with all his bouts coming in Mexico due to age restrictions for pro bouts in the U.S.

The father-son duo started their own H2O Promotions company to help Sylve get his pro career started as he seeks to make the journey to the top.

“My son is a great kid and people are always impressed by what they see in his skills,” said Ivan. “Even as a young fighter, I was well aware that his ring generalship and boxing IQ were well beyond his years. He’s quite special in and out of the ring and I’m extremely proud of him.”

With his U.S. debut set for February 26, just under a month after he’ll turn 18-years-old, Sylve is eager to deliver a strong performance and leave a lasting impression when he steps into the ring.

“I can’t wait to fight in Pomona and be in front of my fans,” said Sylve. “I have a big following in and around Southern California and in my hometown of Long Beach. I know they’re all going to come out and watch me. For my fans around the world, who are so excited to watch me fight, I made sure it is broadcasted free of charge on YouTube live. I’m going to show up and put on a great show on February 26.”