Following its third consecutive year of record growth in 2019, River City Bank brings its unique mix of community-mindedness and market sophistication to the North Bay Area with the addition of Jim Kimball as Executive Vice President and Market President for the North Bay region. Kimball, a longtime Petaluma resident, formerly served as Bank of Marin's COO and has held leadership roles with Wells Fargo, Wachovia and Bank of America. 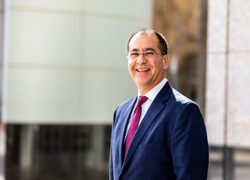 The North Bay is an area of tremendous personality and significant growth potential, and our team is eager to learn from Jim’s experience and passion as we welcome him to River City Bank.

River City Bank is expanding its business banking services in the North Bay region and has announced Jim Kimball as Executive Vice President and Market President for the North Bay. In this new role, Kimball will expand the bank’s commercial banking presence by establishing a footprint and hiring a locally based team to serve business clients and communities in Marin, Sonoma and Napa counties. He brings more than 30 years of experience building and leading commercial banking teams, having most recently led commercial banking, retail banking, wealth management and marketing efforts as Chief Operating Officer at Bank of Marin. As a longtime Petaluma resident, Kimball also remains involved in a variety of community organizations and shares a passion for the region with members of River City Bank’s leadership team.

“Given my history as a banking executive in the North Bay and CEO of National Bank of the Redwoods, it’s fair to say that our search for the right person to bring River City Bank’s market sophistication and community-mindedness to the area has been a bit of a personal quest as well,” said Steve Fleming, President and CEO of River City Bank. “We are pleased to have Jim at the helm, and I am confident that his vision will soon overtake my own as he establishes new business relationships and builds a local team to foster growth in the region.”

TWEET THIS: BREAKING NEWS: Former Bank of Marin COO Jim Kimball joins @RiverCityBank as Executive Vice President and Market President for the North Bay, responsible for expanding the bank’s commercial banking presence by establishing a footprint and team in the region. #businessbanking

“As a Sonoma County resident, I know how important it is to maintain local autonomy while competing on a larger stage,” said Shawn Devlin, chairman of the board at River City Bank. “The North Bay is an area of tremendous personality and significant growth potential, and our team is eager to learn from Jim’s experience and passion as we welcome him to River City Bank.”

“River City Bank has made a name for itself as one of the strongest locally owned banks in California, with a history of consistent portfolio growth and leadership within the community,” said Jim Kimball, Executive Vice President and Market President for the North Bay at River City Bank. “Now that Steve Fleming and his team have decided to invest in my hometown and nearby communities, I am excited to create new opportunities to benefit businesses throughout the area.”

Prior to his role with Bank of Marin, Kimball spent nine years at Wells Fargo, five of which involved leading Wells Fargo’s North Coast Regional Commercial Banking Office and Wine Industry Specialty Group. Prior to Wells Fargo, Mr. Kimball served as Regional President of Northern California and Nevada for Wachovia Bank. Earlier in his career, Mr. Kimball spent more than 20 years with Bank of America, where he served in various roles including Senior Vice President and Market Executive for the commercial banking Bay Area Region, a territory spanning from San Jose to the Oregon border.

Kimball earned his MBA and Bachelor of Science degree in Finance from California State University, Sacramento. He has been involved in a number of community organizations including the San Francisco Chamber of Commerce, the Wine Business Institute at Sonoma State University, Petaluma Educational Foundation and North Bay Leadership Council. He and his wife reside in Petaluma and have two adult children.

About River City Bank
Named one of Sacramento Business Journal’s “50 Fastest Growing Companies” for each of the past three years, River City Bank is the Sacramento region’s premier business bank with assets over $2.5 billion. River City Bank offers a comprehensive suite of banking services, including loans, deposits and cash management tools to the business, consumer and commercial real estate sectors. With tailored, executive-level service and a “Superior” financial rating from the nation’s leading independent bank-rating firm, Bauer Financial, River City Bank redefines the banking experience and every touch point that surrounds it. River City Bank is the largest, independent, locally-owned bank in the Sacramento region with offices in the San Francisco Bay Area and a presence in Southern California. For additional information, please visit RiverCityBank.com or call (916) 567-2600. Member FDIC. Equal Housing Lender.