R.J. Sbordone Unravels Story of an Ex-Navy SEAL Who Must Save Human Race from Sinister Aliens

“CLIENT FROM THE FUTURE” follows the adventures of Dr. Joseph Morgan, a clinical psychologist and former Navy SEAL who must save the human race from being exterminated by extraterrestrials. 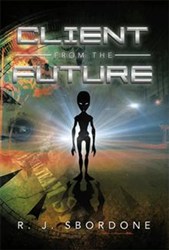 Dr. Joseph Morgan is former navy SEAL lieutenant who had been awarded the Navy Cross and a silver star for his heroic actions in combat. He becomes a clinical psychologist after he is discharged from the navy to assuage his guilt for killing a 12 year old boy to prevent his SEAL team from being detected while they were on a covert mission in Iraq.
.
As a clinical psychologist, Dr. Morgan learns from one of his clients, who he discovers is from the future, that extraterrestrials have secretly transformed thousands of human beings (including prominent political leaders) into biological robots by implanting computer chips into their brains so that they can control their behavior. The extraterrestrials plan on using their biological robots to destroy the human race and take over the planet. To prevent the extraterrestrials from carrying out their agenda, Dr. Morgan must utilize highly advanced technology and weapons from the future and his background and training as a navy SEAL. To stop Dr. Morgan the extraterrestrials set up ingenious traps to kill him and turn his beautiful girlfriend into a biological robot.

CLIENT FROM THE FUTURE is a page turner that is filled with excitement, suspense, action and surprises. Readers of techno-thrillers and sci-fi fanatics are in for a blockbuster treat as they follow the exploits of Dr. Morgan who relies on his background and training as a former navy SEAL and clinical psychologist and the advanced technology and weapons that are given to him by his client from the future to defeat the biological robots and extraterrestrials.
For more information on this book, interested parties may log on to http://www.Xlibris.com/.

Robert Sbordone lives in Laguna Beach, Calif. He holds a doctorate in psychology from UCLA and completed his post-doctoral training at the UCLA Neuropsychiatric and Brain Research institutes. He has a private practice where he sees patients with traumatic brain damage and post-traumatic stress disorder. He has been interested in science fiction since he was a child.