The coming period of economic contraction and resource shortage will cause the entire world to reject liberalism and turn back towards conservatism, according to a new scientific text published by Federalist Publications, examining the biological forces which produce ideological shifts in populations. If this book's thesis is true, all other factors, from demographic projections to cultural evolution will prove powerless to forestall a new conservative political revival. 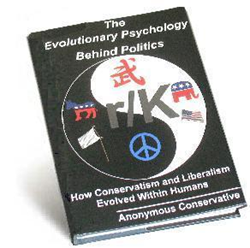 'That book opened my eyes in a way that nothing I've ever read, ever has... what Darwin's... or especially Einstein's insights were... the most eye-opening theory about politics I have ever read... This book is mindbogglingly brilliant.' - Bill Whittle

For the last few months a new book published by Federalist Publications has been percolating beneath the surface of the conservative political movement. Titled The Evolutionary Psychology Behind Politics, it explains scientifically the biological reasons that humans evolved political ideologies. Recently, well known conservative figures have begun to come out publicly in hopes of promoting the work's premise. National Review Online Contributor and Conservative Icon Bill Whittle, recently said, “That book opened my eyes in a way that nothing I've ever read, ever has... that must have been what Darwin's Theory of Evolution must have been for biologists, or what Newton's insights, or especially Einstein's insights were for physicists... the most eye-opening theory about politics I have ever read... This book is mindbogglingly brilliant...” Reactionary icon Matt Forney called it, "Shocking, Revolutionary." All agree, on finishing the book, that there is no intellectual analysis of the political world, or the biological origins of the political ideologies of conservatism and liberalism, that is even vaguely similar, anywhere in the field. Given the radical nature of its premise, The Evolutionary Psychology Behind Politics could alter the nation's political battles forever, once it hits the mainstream of the political debate.

The premise of the book is that according to the study of reproductive strategies, and specifically what is called r/K Selection Theory in Evolutionary Biology, there exist only two significant types of environments in nature - either an environment with plentiful resources, or an environment where there are not enough resources for everyone. These two environments each mold the personalities of the animals that inhabit them, by selecting for those whose psychologies and instincts are best suited to each environment. This imbues these animals with two personalities, each designed to see the world, and confront it, in very different ways. Under the premise of this work, political ideologies are just intellectual manifestations of these two deeply imbued instinctual natures, which were burned into human brains through intermittent exposure to each environment during the past. Today, they are designed to emerge in response to changes in resource availability.

As an example, rabbits are more docile, more promiscuous, and less emotionally committed (ie.loyal) to peers and young. They have one of the above described personalities, called an r-selected psychology, or r-selected reproductive strategy, and it is identical to that of the modern liberal's psychology in both perceptions and desires. The r-selected psychology is designed to confront a world with a plethora of resources, such as fields of grass that rabbits can never strip bare. r-strategists such as rabbits are designed simply, to turn that plentiful grass into more rabbits, as fast as they can. Since food is everywhere competition is a dangerous and unnecessary risk, and fitness and adaptability to a harsh world is not a concern - or even on their mental radar. Since competition does not occur, r-strategists don't need to carefully seek out the fittest mate and monopolize that fit mate with monogamy, to produce the genetically fittest offspring possible. Since almost all offspring, no matter how unfit, can get food, all they need to do is produce sheer numbers of offspring with as many mates as possible, regardless of quality, by mating as much and as fast as they can, with whomever they can. r-strategists will also have minimal desire to spend intensive effort rearing their young, or to protect the young unquestioningly (imagine liberals supporting abortion, rabbit-esque single parenting, and other aberrant “family” structures that are hurtful to children). Nor do r-strategists join loyal groups to compete, or become concerned with the idea of in-group vs out-group competition. Just as the liberal is programmed to think that there are unlimited government resources to expend, rabbits are programmed to behave as if resources will always be limitless. From docility and competition aversion, to sexual “openness,” to single-parenting, to lack of a desire to form loyal packs, both liberals and rabbits are designed as psychological r-strategists. The evidence cited in The Evolutionary Psychology Behind Politics clearly indicates that the r-selected reproductive strategy is the biological origin of the entirety of modern liberalism's intellectual foundation.

Conversely, wolves are aggressive/competitive/protective, sexually selective, family/pack oriented, and emotionally devoted and loyal to their pack and their young. They have a different psychological nature, called a K-selected psychology or a K-selected reproductive strategy. This psychology is designed to confront a scarcity of resources which they must compete for, if they are to acquire them. Since their world is dangerous and competitive (and they will starve if they don't fight for a share of the limited food), they form competitive packs of loyal peers, and seek to make their offspring genetically fitter than everyone else's through careful mate selection and mate-monopolization/monogamy. They rear offspring very intensively within a strong family, with lots of protection and care. Having labored to produce a highly fit offspring, they want to protect it, and need it to succeed in competition itself, so they raise it very carefully. Like conservatives, every element of their psychology presupposes that their world is one of danger, competition, and limited resources. It presupposes that those resources are not plentiful enough to provision everyone, so danger is ever-present, competition is inevitable, victory is essential, and adaptability to a harsh world is imperative. The book makes an incredibly strong case that this K-selected reproductive strategy is the biological force underlying the conservative ideology.

According to the book, as a result of this evolutionary phenomenon of r/K selection strategies manifesting in humans, human beings have two political ideologies – one is r-selected, and one is K-selected. The r-strategists instinctually want a world around them where everyone is provisioned fully and equally and there is no competition - so no one can exert themselves to acquire more than another, and fitness and ability have no bearing on success. The K-strategists expect a world which is competitive - where people seek greatness in competition, and the inherently limited resources are apportioned based upon ability, effort, and determination. One theory of political ideology, which explains everything, from why leftists will tend to support promiscuity, single parenting, birth control, and abortion, to why individuals on the right support gun-ownership, oppose welfare and one-world government, all while insisting on family values and monogamy.

The Evolutionary Psychology Behind Politics then examines human evolution, showing how different populations of humans were exposed to these two environments in our past. It goes on to examine how as a result, humans evolved both rabbit-like and wolf-like personalities that are designed to emerge in populations to confront changes in resource availability. It demonstrates how it is these underlying personalities which form the emotional foundations of political ideologies, and it is the environment's level of resource availability which elicits the formation of these personalities.

From the crop surpluses of the Medieval Warming Period producing the Dark Ages, to foreign booty and slave labor fueling the Roman Empire's degeneracy and collapse, flood a nation with success, free resources, safety, and ease, and the liberal rabbits will flow from the earth, overwhelm a society, and enlarge its government with an eye to making a world where free stuff is available to everyone, everyone mates freely with each other, and low-investment parenting is the norm. Eventually, the rabbits collapse the whole governmental structure, by fostering a society which actively rewards the quick reproduction of a high quantity of unmotivated and incapable imbeciles. As that society collapses, resource availability will be cut back, (such as during the Carter years, the pre-WWII years – or what is rapidly approaching today as governments head toward bankruptcy). Suddenly, people will begin to form into packs of more loyal, in-grouping, conservative wolves, and liberal rabbits will be thrust out into the cold, out of necessity. As this occurs, conflict and competition will rise, further punishing and culling the inability to compete. Eventually as things sort themselves out, all of the fit, competitive people who remain will come together to produce a civilization that is optimally efficient and designed for a competitive world. Greatness once again emerges from their aggressive, competitive drive, it produces copious resources, the rabbits re-emerge, and the cycle begins anew. Nowhere has a credible theory for the “cycles of civilizations” ever been proposed, and yet in light of r/K Selection Theory, it suddenly becomes not only easily explainable, but entirely predictable.

The Evolutionary Psychology Behind Politics fashions an amazing argument based upon peer reviewed scientific sources. From an examination of the genetics of politics and how that mechanism will interact with the neurochemical milieu produced by resource availability, to examinations of the differing brain structures ideologues exhibit and how they relate to harshness or ease, to historical examinations of resource availability's effects on the emergence of ideological movements, to the neurochemical foundations of ideologies, the book makes a fascinating case. It actually takes conservatives into the minds of liberals, examining what data their liberal brains prioritize, what data they lack the cognitive hardware to process, why not having developed that hardware is beneficial to their reproductive strategy, and how all of that produces the liberal ideology on open display today. Suddenly, political ideologies are clearly revealed as merely intellectual outgrowths of deeper underlying Darwinian reproductive strategies, designed to exploit resource blooms, or survive resource shortages. Even the very biochemical and neurological mechanisms which are responsible for triggering all of these behaviors are laid bare in simple, layman's terms.

With hundreds of footnotes citing peer-reviewed scientific studies, The Evolutionary Psychology Behind Politics is not just easily readable by laymen. It also highly substantiated scientifically. The only question that remains is what effect it will have on today's political debates when grassroots conservatives begin discussing it amongst themselves, and liberals are forced to confront it. Not surprisingly, the vast majority of the reviews on Amazon.com have given it a perfect five star rating. As author and social commentator Matt Forney said, “This book in one word – Revolutionary... Evolutionary Psychology is a must-read for the simple fact that there's nothing out there quite like it... The Evolutionary Psychology Behind Politics” is one of the most important books of our time, and one you absolutely must buy.”

Whether it will alter the political debate forever depends only upon whether readers embrace it, and promote it among friends, with the same fervor that the leaders of the Conservative movement have exhibited as they have promoted it.

Editor's note : The Evolutionary Psychology Behind Politics is now made free in Kindle format roughly once per month, in an effort to advance the intellectual support for the conservative cause. According to the author's website, the only condition of accepting the book free, is that one helps to spread it's ideas through the conservative grassroots, if the opportunity arises. To be notified of a free release date, visit http://www.anonymousconservative.com.

Comparing ideological inclination with resource limitation demonstrates the link between ideology and the r/K trigger that is resource availability.A line graph of the Conservative Policy Mood vs time, laid over a bar graph of the Economic Misery Index.