RNR celebrates the record-breaking turnout for "Stuff the Bus" in the Norfolk, Virginia area. 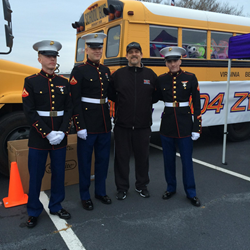 "Stuff the Bus," an annual event in the Hampton Roads and Norfolk, Virginia areas, that collects toys for kids that would otherwise spend Christmas without any gifts, broke their record for toy collections this year. From December 1st through the 5th, Shaggy, a popular Z104 radio DJ, lived on a bus that traveled to five different areas to collect toys for children. He chronicled each day with a video on the Z104 website to keep people updated on his progress, but what he really showed was the generosity of a community committed to taking care of their children this holiday season.

In conjunction with the Toys for Tots program that the US Marine Corp runs every year, Z104 has created the "Stuff the Bus" event to help children in their local area. This year, RNR Custom Wheels and Tire Express stores of Norfolk were the title sponsors of the event. They were on hand to help Shaggy collect gifts and load the buses, as were many US Marines. RNR also went on a shopping spree at Toys R Us, and, later, loaded up a fleet of trucks with gifts for the kids.

"Stuff the Bus," already the largest toy drive on the East Coast, broke all records this year. In 2013, 15 buses were stuffed with toys at the end of Shaggy's five-day tour, but this year, that total jumped to 18 and over 115,000 toys! According to Shaggy, next year is the tenth anniversary of "Stuff the Bus," and they plan to break even more records then.

Shaggy's five-day journey may be over, but RNR is not finished with their part of "Stuff the Bus." They'll continue to donate $2 for every tire sold until December 18th, 2014. They're planning another shopping trip to Toys R Us just before Christmas Eve to finish out the work of the program. They also have "Jingle Jars" available at each RNR location in the Norfolk area for anyone who would like to contribute to the cause. The goal of "Stuff the Bus" is to make sure that every child has a magical Christmas, and it looks like the kids of Norfolk have a lot of magic still to come this season.

The RNR Experience
RNR customers are provided a program that allows them to pay for the custom wheels and tires that they want in easy weekly, bi-weekly or monthly installments with no credit hassles. In addition, customers are offered the lowest cash prices on wheels or tires and have a huge selection of both new and previously rented merchandise. RNR carries just about every major brand in the custom wheel and tire industry, including: Dub, KMC, Lexani, Michelin, Goodyear and many more. For information on RNR, contact our Corporate Offices at 813.977.9800 or visit us online at rnrwheels.com