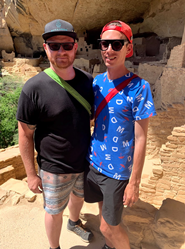 Brad and Matt Kirouac are exploring America's national parks and podcasting about their experiences in "Parklandia."

The podcasts will include “cultural and historical elements that really made us obsessed with the parks in the first place,” explained Brad.

Brad and Matt Kirouac are both Robert Morris University Illinois alumni. They met in 2014, married in 2015, and settled into a comfortable life with their dog Finn in Chicago’s Ukrainian Village.

While they come from different backgrounds and locations, they share a love for food. It’s something they were both involved in their respective careers – Matt, originally from New Hampshire, is a chef-turned-food critic and culinary writer, and Brad, from suburban Detroit, is a Marine veteran and event manager for Burton’s Maplewood Farm.

Things were going fine with their jobs and Chicago’s city living. Then, after some discussions and consideration about the things they really wanted out of life, they made the decision to, literally, take a different path.

With a mutual obsession for the open road and national parks, Matt and Brad knew they would love visiting them and writing about their travels, all while working. So, they packed up everything from their home in Chicago, bought an RV and headed out to travel the country full-time, visiting as many national parks along the way as possible. After being on the road for a few months they were contacted by iHeart Radio to create a series of podcasts as they visit the different parks.

“Parklandia” is now available for downloading through the iHeart app, Apple Podcasts, and anywhere you listen to your podcasts. Much like their namesake, albeit spelled differently, the Kirouacs are creating their own “On the Road” chapters that will relate their experiences as traveling workers, with stories of people who have impacted each park, different campgrounds, and the “cultural and historical elements that really made us obsessed with the parks in the first place,” explained Brad.

Their iHeart Radio producer Myke Johns and executive producer Christopher Hassiotis create a magical element with the production of Parklandia. Setting the tone for the show as whimsical, majestic, and sometimes magical creating elements of surprise. The Robert Morris University Illinois website will provide a link to their podcasts and announce new episodes. Both Matt and Brad are excited to share the stories of their travels on the road to new and different national parks. Author Jack Kerouac seemed to explain perfectly the anticipation for such a journey: “Things that were to come are too fantastic not to tell.”